We're here, Beijing's pretty big, and I don't eat that part of the duck

[Note: photos take a really long time to upload, so I'll add them bit by bit as I go.]

Penguin and Armando made an uneventful 12-hour flight today—of course, all flights are uneventful if you're booked in BusinessFirst.  Check out what $7,000 buys you (Tsinghua University is picking up the tab, happily):


I was met at the airport by my recent PhD graduate and now junior faculty at Tsinghua, Wei Xu, who came to pick me up.  Despite my fears, the air quality is no worse than LA, although Wei said today was a particularly nice day—you could often see patches of blue sky—and winter is far worse, with days when you have to stay inside or wear a mask outdoors.  It was in the 80s but breezy, so not bad for walking around.  I did notice that although the smog wasn't so bad, in fact Tonia and I had much worse in Chiang Mai, there is noticeable particulate matter in the air—very fine grit—from all the construction as well as the dust storms that blow in from the north.  This is very noticeable and I wore sunglasses just to mitigate it.

The traffic here is horrific.  Imagine wide boulevards on the scale of Vegas or Florida; then pack them with New York traffic density, and combine with Thailand disregard for traffic signals.  Cars, bikes, motorized rickshaws, cargo tricycles, buses, and pedestrians all fight their way through or across intersections, using the "safety in numbers" heuristic—when enough people start to move, they start an avalanche.

I briefly saw Wei's office and then we rented me a bike so he could take me on a guided bike tour of the Tsinghua campus.  It is remarkably nice with lots of trees and little lakes; as I learned, this is because its grounds were formerly part of the Winter Palace for nobility, and much of the landscaping survived when Tsinghua was set up in 1911.  Because it was set up with American help—in a fit of pity, the Americans returned $10 million of the indemnity money China had paid to the US after the failed Boxer Rebellion, on the condition it be used to establish a university that would serve as the basis for Chinese-American foreign exchange programs—the original quad and earliest buildings around it (now nicely restored) look for all the world like the University of Illinois or any other midwestern campus.


The scale of this place takes getting used to.  The dorms on campus are a set of five or six enormous high-rises and many more low-rises...here's a short panorama of the former and a shot of the latter: 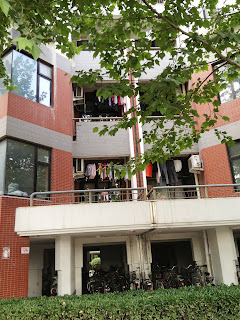 The cafeteria is a four-story building that could be described as the world's largest food court.  Bicycles are everywhere on campus since most students can't afford cars.

After our campus tour we had a nice dinner, and I couldn't help photographing some of the pages in the beautifully-bound menu book.  Duck tongues?  Sea cucumber stew?  Pig's feet?  Goose liver?  Nom nom!  (We had fairly conventional salads, noodles, and kung pao chicken, which remarkably tastes the same as it does in the US.)  Have fun perusing these before you skip down...these are just a few of the delights I passed on:


Last on the evening agenda was wandering down to the bars and pubs district adjacent to the university campus.  It was fairly sterile—a lot like Singapore maybe, no character to speak of, but plenty of people were out and about.  We ran into a group that I thought was like Critical Mass, but Wei translated the banner and they're basically bicycling to promote green transportation.  Good for these kids!  (By the way, of the roughly ten thousand cyclists I saw today, these were the only ones wearing helmets or using bike lights after dark.)


The two highlights of our walk: just after we crossed some train tracks at grade, the crossing gates came down and a train of at least 20 cars went by, including sleepers, a kitchen car, etc.  Wei said it was going to inner Mongolia.  I thought how interesting it might be to jump on and emerge in inner Mongolia 18 hours later, and I will stop at the main Beijing station during my sightseeing tomorrow to see if I can understand where the trains go.  Second was when we stopped at an upscale shopping mall so I could use the bathroom.  The shopping mall contained all the high-end Western luxury stores, an Apple store, and so on, and…immaculate bathrooms featuring squat toilets and no toilet paper.  No kidding.

So tomorrow when Penguin and I take off to see the Forbidden City and Tian'anmen Square and stuff (Wei graciously loaned us his Clipper-card-equivalent), I'll be sure to take toilet paper and hand wipes...

By the way, the Great Firewall of China actually blocks access to Google's blogger site, on which I'm writing this, as well as YouTube, Wikipedia, BBC News, any major site critical of China, any major site containing info about Tian'anmen Square or Tibet, and so on—that is, the kind of Internet freedom you take for granted.  (You can read about it on Wikipedia, if you're not in China.)  Like many technically adept Chinese, Wei runs a tunneling proxy offshore to trivially subvert this.  (Non-techies: it's a way to funnel your traffic through another server to obscure either the origin or destination of the traffic.  It requires technical know-how that a first-year CS student or smart high school student would possess, and costs a few dollars a month.  Tonia: it's how we got a discount on your dive mask by running the traffic through a server located in Mexico.)  Apparently the government is aware of this and doesn't crack down, which would be hard to do anyway for technical reasons, since tunnels can be set up anywhere in the world and torn down quickly, so it would be like playing whack-a-mole to try to keep them shut down.  People even sell tunneling setup services on eBay here, but the government relies on the fact that most people will just be too intimidated or too lazy to set it up—what Larry Lessig famously calls the Bovinity Principle—and will instead simply submit to widespread censorship.  It's worth noting that more people live under this government than any other on Earth.  It's also worth noting that acting according to the Bovinity Principle invites even more control to be exerted.  Although, to be fair, when a bunch of students in 1989 tried standing up for freedom overtly, they were rolled over by tanks, so maybe a tunnelling proxy is the way to go after all.

Off to bed, as I successfully made it til 10pm local time.  Photos and more narrative to come!