A night and a day in Hong Kong

After yesterday's Disney adventure, I had a bunch of work to do, after which I was ready to reward myself with dinner.  So back to the MTR station to head downtown.  This photo doesn't do justice to scale, but this is the elevator tower and passageway that leads from the HKU campus to the MTR station.  The tower shaft is about 10 stories tall and ends in this walkway connecting you to the HKU campus area.  Below ground, the tower extends 10 more stories, for a total of 100 meters of length, because since HKU is on a hill the actual station tunnel is deep underground.  I wonder what happens when the elevator power goes out. 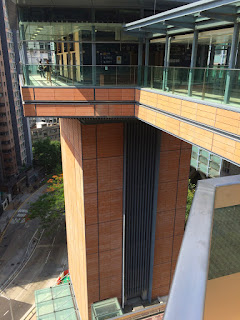 Thanks to Yelp, I found a restaurant in Tsim Sha Tsui with a million-dollar view—kind of a hipster upscale bar—and amazingly I scored one of the few tables on the outdoor terrace!  I got to talking with a young couple from Singapore at the adjacent table, who had been in Macau to a trade show for companies that sell casino gaming machines. We talked about world economics, Singapore after Lee Kuan Yew's death, and the future of Asia.  Then later as they were leaving, a couple of British-born Indian guys from London, one of whom had just retired from the "financial engineering" industry (computer-aided short-term trading) and was burned out and taking a break in HK deciding what to do next, took over the table so I bugged them too.  All in all, I had a couple hours' worth of the great conversations I love so much as part of traveling in a foreign country. 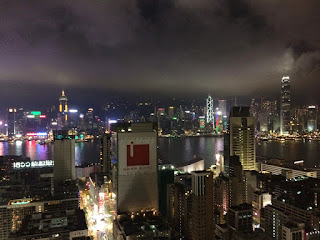 Today was mostly given over to work, but I did take a 1-hour study break to go downtown and walk around Sheung Wan, where there is a concentration of stores and stalls that sell dried seafood and other weird things.  Penguin was vaguely amused.


After some afternoon meetings we had dinner with the Dean—a very nice guy who's only been here 3 years, and was previously Dean of Engineering at Case Western, and before that the head of the Electrical and Computer Engineering department at UC Davis while also holding a faculty appointment at Berkeley (he's a Cal grad—Go Bears!).  We went to a fancy-ish "Pekingese" restaurant with a fixed menu of N courses of two bites each.  The last time I was here, most of those bites were disgusting, but this meal was fine with the exception of the appetizer—pickled pig knuckles and raw jellyfish (or as they distressingly call it here, "sea blubber").

What the hell.  I still love Hong Kong and everyone here has a sense of humor about stuff like that.  Looking forward to a couple of days of strenuous work, though if I get any kind of break tomorrow I'd like to briefly check out the famous electronics flea market in Sham Shui Po.

For now, it's time to watch the amazing lightning and thunderstorm happening right outside my window.