I got to spend time with deportees today

Well, this is a first for me.

I arrived at Sao Paulo airport early this morning as part of a whirlwind lecture tour, having just spent a week in three different cities in Spain.

Unfortunately, I didn't realize that US citizens need an advance visa to enter Brazil (and it cannot be issued or purchased on arrival), and my host had forgotten to tell me.

So I was refused entry to the country.  ("You don't have to go home, but you can't stay here.")

First, of course, I was taken to the little room where the customs police are.  I learned various things (fortunately the customs guy spoke good Spanish, because most people at the airport didn't speak much English if any). First, there are no exceptions to the rule of having a visa on arrival, not even by calling the US consulate (which I did). Brazil has a "reciprocity law" where if some country requires Brazilians to have a visa to enter, then Brazil requires citizens of that country to have a visa to come here.  Second, the airline that flew me into Brazil (Iberia, coming from Madrid) was partially responsible because they were supposed to have verified at check-in time that I had the necessary documents to enter the country they were taking me to (which they obviously didn't).

"Responsible" means they are also financially responsible for getting me back out of the country, but technically, only for getting me back to where they flew me from, not from where I actually needed to go.  Since I certainly didn't want to go back to Madrid, I called United, changed my return flight, and am hoping I can get the $600 price difference (United was nice enough to waive the change fee) back from Iberia.

I figured that the one saving grace would be that in a splurge of last-minute indulgence, I had paid a significant amount to upgrade my flight from Madrid to Brazil to business class, so that I could get a good night's sleep (which I did) and be ready to work today.  I figured that would entitle me to use the business class lounge in Sao Paulo airport, where I'd clearly have to spend the day, since my flight is not until 9pm and I had arrived at 6am.

But this is where it got more interesting.  This whole time I'd been in the customs area; now I had to be taken to the "no man's land" for people who haven't cleared customs, until it could be sorted out with Iberia whether I could use the VIP lounge or not.  Mind you, we're not talking about the transit lounge: it's the place where people being detained, deported, etc. are held, including people who were kicked out of the transit lounge because they didn't have the proper visa to continue on to wherever they were going. 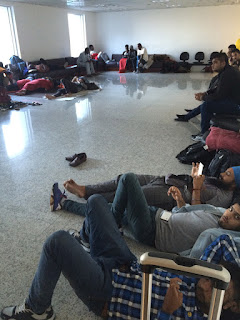 It is a cheerless room containing a bathroom, two water fountains, and not enough seats.  As you can see, some people had clearly been there a while.

Some people were sleeping on blankets and had clearly been there for hours or overnight.  A couple were praying on blankets, having oriented them in the direction I assume Mecca must be.  Most were on smartphones; every wall outlet had something plugged in.

I figured I might as well be friendly, and I learned some interesting stories.  Narendra Singh and some of his friends from the Punjab had been on their way to Ecuador, but Ecuador didn't let them into the country (they still don't know why, since they had visas) so they were sent back and were now awaiting the ability to get home.  Michael from Liberia was enroute to Mexico, but at the transit lounge they had pulled him aside and sent him here; I wasn't quite sure why.  He had lived in the US and spoke perfect American English.

Suleiman and Neru (photo) are refugees from Bangladesh trying to gain asylum in Brazil. But something was wrong with their refugee documentation, and they were waiting for an immigration lawyer to come to the airport to help them.  Their English wasn't as strong but they made themselves understood to me.  Unfortunately, almost nobody at the airport here speaks much English; my Spanish is pretty useful, but if English was my only language, navigating a problem here wouldn't be trivial.

Nonetheless, everyone was of good cheer, smiling, friendly, and incredulous that I was in there with them.  Suleiman insisted on becoming Facebook friends, and I couldn't really say no.

Penguin was just bemused at the whole thing.

Eventually an Iberia agent came and pulled me out of the "holding pen" to transfer me to the VIP lounge. (Although they are still holding my passport hostage until my flight boards—I guess they want to make sure I don't use it for anything except leaving their country—and I had to sign a statement saying I understood why I was being kicked out.)  The lounge is certainly an improvement—I'm going to try to record my lectures here and provide the videos to my host, there is food, I was able to get a shower, it's reasonably quiet, and they even have some cots for sleeping.  And while this is an inconvenience for me—I have to fly home overnight, via Newark—Suleiman et al. are still in the holding pen, which puts things in perspective.


For an update of what happened next, go here.