After a long but uneventful flight to Helsinki via Frankfurt, we're here! (Pro tip: the Frankfurt flight is codeshare between Lufthansa and United, so my United Club credit card which grants United and StarAlliance Gold status got us into the nice lounge at Frankfurt.)

While many people speak English, outside the airport few signs are in English, including those for the public transport system. We had great directions from our AirBnB host so it was easy to get to our little studio, but today it's Google Translate all the way ...


We took a walk along the Helsinki waterfront (it was light out until 10:45 pm) to try to adjust to local time, one highlight of which was the brand-new public sauna built on the waterfront. The building is very Nordic in design, with lots of wood-slat construction, and you can walk around on top of it, where there is a nice wine bar, as well as inside, where there's also a lovely wine bar. We will make it a point to try the sauna before we leave! 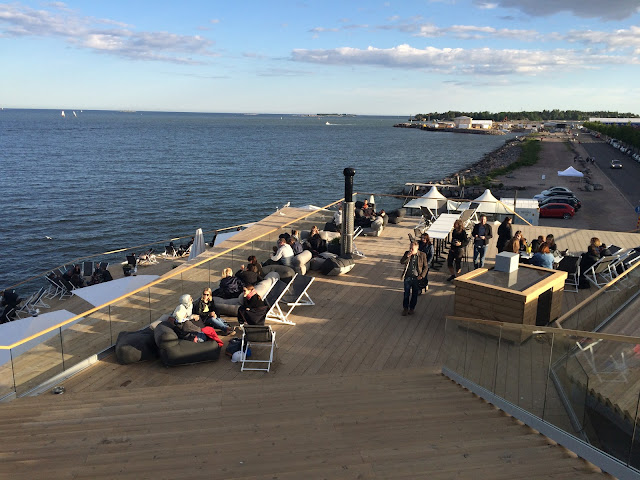 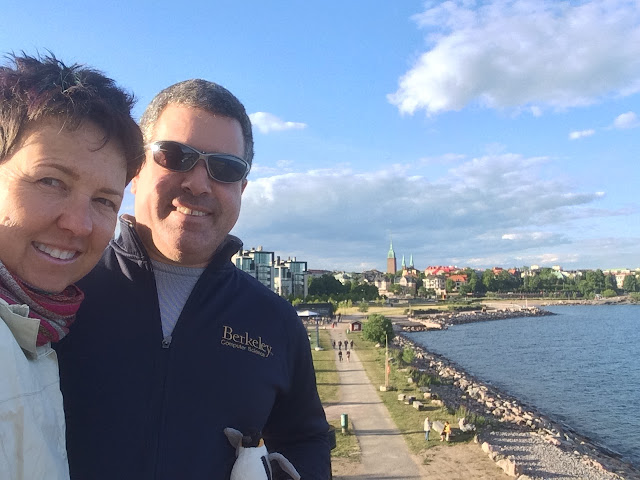 Now after a good night's sleep today we're seeing Suomenlinna, the 250-year-old military fortress and UNESCO site, and a walk around Helsinki. For a capital, it seems really quiet, but maybe people go to sleep early even when the sun stays out late.

Helsinki is small! We walked through downtown to get to the Market Square and Old Market Hall, which are a cross between Fishermans Wharf and the Ferry Building-- some interesting food to be had (we had fish cakes and a reindeer wrap, but decided to skip the canned bear meat) but also quite touristy. A highlight(?) is the thieving seagulls, who are so bold that I saw one of them swoop down and snatch an entire half-sandwich from a woman's hand as she was transporting it to her mouth!


Today's main activity was seeing the Suomenlinna, an island fortress about a mile out into Helsinki harbor. The fortress was built in the 1780s when Finland was part of the Kingdom of Sweden, to defend against sea attack from Russia. The Russians decided to attack by land instead, overran Finland, and took the fortress. 110 years later in 1917, while Russia was distracted with its revolution and the rest of the world was distracted by WWI, Finland regained its freedom and the fortress. It's now a UNESCO world heritage site and an official neighborhood of Finland where around 800 Helsinkians live. 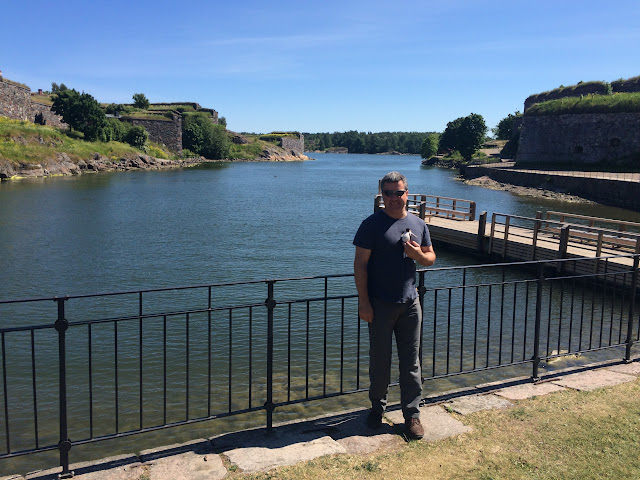 We took the official Suomenlinna walking tour, but it's one of only two such tours I've ever walked out on. I don't know if it was the pacing or our guide's slow cadence or what, but even though this interesting fotress includes battlement tunnels you can crawl through, a still-operating prison, and more, she somehow made the narrative paralyzingly boring. We went off on our own instead, and Tonia even ran into someone paragliding—albeit bobbing essentially in place since there's really nowhere to fly once he caught the ridge lift from the seacliffs at part of the fortress.

The fortress is spread over four small islands in Helsinki harbor's archipelago, and these days has more the feel of  park than a military museum. Our advice is skip the tour and just use your guidebook to learn the basics, and absorb the atmosphere and scenery instead.

After dinner at a cafe downtown, I suggested hitting the rooftop bar at the Torni Hotel, recommended by a friend of mine as having the best view in the city. In the elevator we met Lawrence and Saurabh, here on business, and by the time we got to the top floor, Lawrence was offering to buy a round of shots of licorice liqueur that looks like tar. Remarkably we secured a table (there are only about 8 on the terrace) and had a great evening having met these two nice guys…


We also met another guy from Germany sitting at an adjacent table who said, and I paraphrase, "Everything bad happening in the world is America's fault, because America wants to break up Europe. But hopefully they will elect Trump, because he can make a revolution [sic] since he doesn't need the money." It's hard to figure out where to start debugging such drivel, but that baseline calibrates his other opinions, including that Indian subcontractors will "stab you in the back the moment you turn around and let them" (Saurabh didn't react) and "Cloud computing is nothing new" (he picked the wrong guy to blow smoke around on that particular topic). Apparently they have rednecks in Europe too.

We left the bar at 11pm, in bright sunlight. We walked home and got there near midnight, or as it seemed here, twilight. 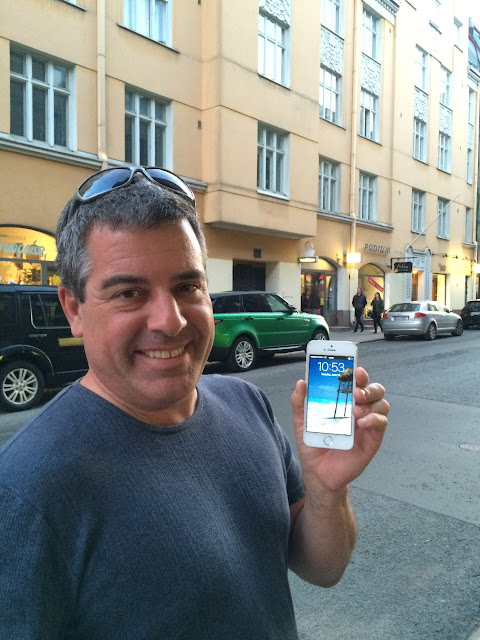 Tomorrow: sauna, then ferry to Estonia!

Today we did the best thing we have done in Helsinki: we went to the brand new public sauna Löyly ("steam") located on the waterfront. There is both a traditional steam sauna and a smoke sauna, in which burning wood is used to heat up the stones, then the smoke is evacuated but leaves the smoky smell behind. Both are way hotter than American "saunas" and there's a deck from which you can jump in the Baltic Sea to cool off between rounds (Armando did, twice). 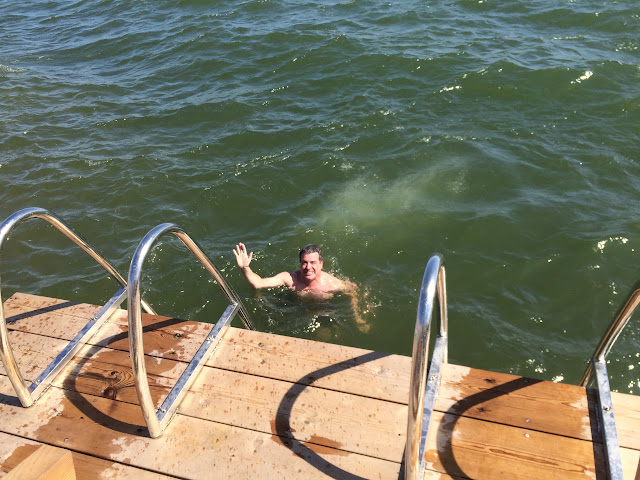 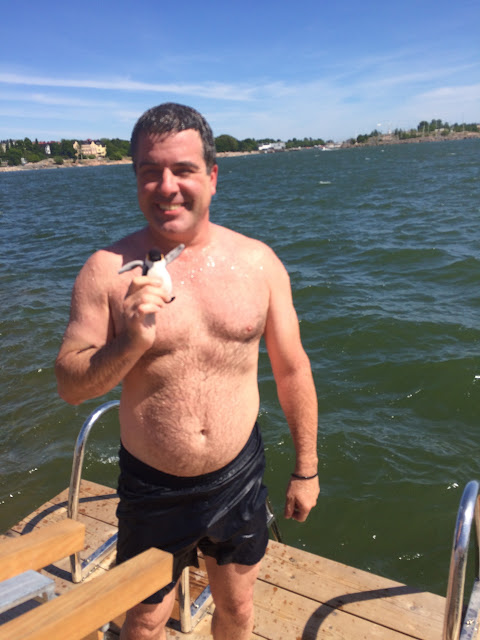 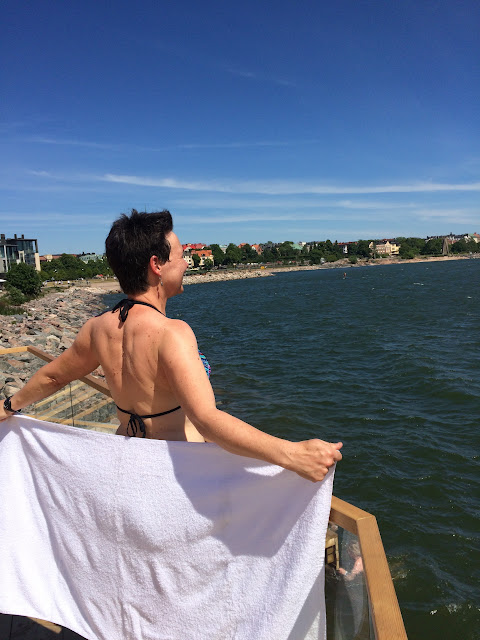 After an hour or so of this, it was time to catch the 2 hour ferry to Estonia. How did we get from the sauna to the ferry terminal? Uber, of course. It's everywhere, and between Uber, AirBnB, and ubiquitous cell phone coverage, the logistical aspects of travel are WAY easier.


The ferry ride was a pleasant excursion, with nice enough weather that we sat outside on the sun deck, although it was quite windy.  Since Finland and the Baltics are all EU/Schengen countries, there are no border formalities. It was a quick walk into Tallinn's Old Town.