Cyprus is a big beach destination for much of eastern Europe, the near Middle East (especially Israel and Lebanon), and Russia: it's nearby, inexpensive, and sun-baked. The landscape looks a bit like northern New Mexico—hot and scrubby—as you can see in these photos of the University of Central Lancashire's Cyprus campus (red & white building, where the conference was held) and the new student housing (white building at right—it's a panorama shot so the road is not really curved). The latter are so new that the road leading to them isn't even paved yet; it looks for all the world like an American condo subdivision going up.

(I'm still not sure why UCLan opened this campus. I suspect the answer is either to make money, or as a loss-leader to feed students to their main UK campus, as this school is not particularly a top tier school. I get the sense many Cypriots like their kids to study a lot of English to make sure they have opportunities after school, and the ones who can afford it send their kids to spend some time studying abroad; the UCLan's brochure "The British University in Cyprus" seems to capitalize on this.)

After the first conference day some of us went downtown for dinner, as there is literally no food to be had on campus after hours (other than pizza delivery to the dorm—really). Larnaca's downtown waterfront reminds me a little of the French Riviera, though I don't mean that in an entirely complimentary way. There's the usual assortment of nondescript but pleasant outdoor cafés; a beach that isn't very wide or very sandy, quite packed with beach umbrellas in neat rows; and enough people bathing that suggests the water's reasonable, but not so many as to make bathing festive. 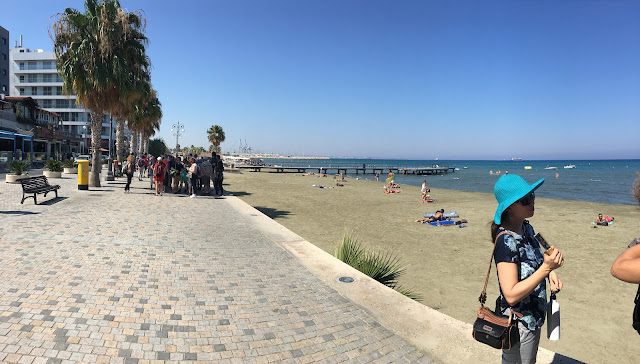 Seems like a nice enough beach, but having just come off a week in Cozumel last month, I wasn't strongly regretting not bringing a swimsuit.
The most interesting part of the evening, though, was what I learned from the bus driver's narration on the way to town (which is a good 25-30 minutes from campus). Disclaimer: You probably know all this. I felt woefully ignorant that I did not.

Historically Cyprus has been a mix of Turkish and Greek culture. In 1974 the Turkish army invaded/occupied the northern part of the island and set up a "country" there that is recognized by no one except Turkey. They expelled most of the ethnic Greeks and took their homes, sending a wave of refugees to the southern part of the island. The island is now ethnically basically segregated, and the Turks are said to be stamping out all signs of Greek culture and heritage in the occupied portion. This explains the UN "Green zone" mentioned in my earlier post: the campus is within the "buffer zone" between Cyprus and the Turkish-occupied zone, presumably so that in case of trouble the campus would remain open and accessible (or at least, the British could get in there and evacuate it).

You might wonder why nothing has happened to end the occupation given that Cyprus was admitted to the EU in 2004, and occupation by a foreign power is a violation of the EU constitution. (Of course, the country doing the occupying isn't an EU country, and indeed the occupation is a main obstacle to Turkey being allowed to join.) The EU has fined Turkey $100M (which it hasn't paid), ordered it to leave Cyprus (it hasn't), censured it (Ankara has conspicuously ignored the censure), and ordered Turkey to stop destroying Greek culture in north Cyprus (they continue to do so). If you believe my cab driver, and I'm not saying you should, the EU has also cajoled Cyprus into solving the problem diplomatically rather than, say, cutting the power lines and infrastructure into northern Cyprus. The Cypriots are understandably skeptical that diplomacy will work now if it hasn't worked since 1974, and they mutter about the Turkish genocide in Armenia (there is apparently a significant Armenian community in Cyprus that was seeded by the refugee exodus when Turkey invaded Armenia early in the 20th century). But to hear the history of the country, it's been occupied, ruled, or overrun by foreign powers so many times—the Phoenicians, the Greeks, Alexander the Great, the Ottoman Empire, the British Empire—that maybe people are resigned to this being a fact of life. I don't know. At any rate, it meant that when I had some beers with Turkish-speaking guys (previous post), it was pretty rare to hear Turkish spoken in the south part of the island, and most people don't take kindly when they do hear it, kind of like speaking Russian in the Baltic countries. To most people you'd speak to in south Cyprus, the culture is basically Greek culture. This also explains why Google Maps shows place names in Greek and Turkish on different parts of the island.

The following afternoon we got a "walking tour" of downtown; we saw the Byzantine Church of St. Lazarus, dating to 890 AD (but looking suspiciously newer), where the tomb of Lazarus is. (Yes, I know the story too, but legend has it the tomb and relics here are from when he died the second time, and I guess you only get one resurrection.) There's also a medieval castle dating from a bit later than that, whose purpose was ostensibly to protect the town and the harbor; the abovementioned history of occupied Cyprus suggests it wasn't working, yet it stood as-is for a thousand years. Facelift thought it was way too hot, and other than a visit to a traditional pottery workshop (I skipped it; I've seen pottery being made, and usually these are ways for the guide to get a kickback if you buy things), the walk wasn't as good as my own perambulations after dinner the night before. My basic takeaway was that such ambience as there is, is dominated by the beach vacation crowd. It was hard to get a sense that the place has a flavor of its own, but I'm probably not being fair as I was here just 2 days for a conference. 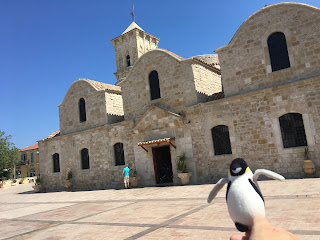 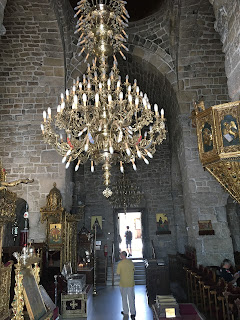 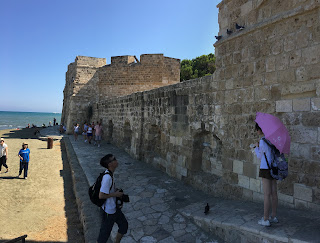 was spent at a taverna with traditional Greek food (lots of little plates), drink (I chose Zivana, a grappa-like drink, over red wine), and dancing. The performers were quite good, including a guy who was dancing with about 15 stacked glasses and a bottle on his head (he claimed to have gotten up to 32 at another gig). There was the usual audience-participatory "dancing" which was more like a conga line, but what the hell. Overall a festive capstone that gave a sense of the culture, and two of my colleagues at the conference who were Greek were really getting into it, as they knew the words to all the folk songs.


I'm not sure I feel a strong need to return, but Cyprus was an interesting place to visit, if a bit hot for my taste (though coming here for a conference is a little like going to Cancún for a conference: if you're not in the conference room, you're both overdressed or overheating in business attire). The whole Turkish thing made me sad, especially because with the US leaving a leadership vacuum and the EU holding on by a thread, the Turks are probably thinking to hell with EU membership, we'll just align with Russia and stay right where we are in Cyprus. But most surprising is that it got little airplay—even my European colleagues didn't know much about it.

Trying to be a citizen of the world, some days are more cheery than others.
Posted by Armando Fox at 5:54 AM

1xbet | 1xbet | Bet with a Bonus - RMC | Riders Casino
1XBet allows you to bet on any 1xbet app favourite horse races or any other sporting event. ✓ Get up to £300 sol.edu.kg + 200 Free https://tricktactoe.com/ Spins No 바카라 사이트 Deposit goyangfc