So far for me, Cyprus is like China: most signs that visitors might see include a helpful English translation, but other than that, I'm lost (or reliant on the amazing Google Translate). This is humbling, after being in French Switzerland (my French is passable) and London (my English is passable, despite being an American). In the immigration line at the airport, I heard some Russian alongside English—apparently this is a very popular beach destination for Russians, and also for douchebag frat boys from London, but that's the subject of another post.

The two languages spoken here are Greek Cypriot and Turkish Cypriot (or Cypriot Greek and Cypriot Turkish, depending on your point of view).  I can sound out words in Greek letters,  but I can only translate very basic things like "EXIT" or "CITIZEN". (I wish I knew how to say "BEER".) On the way here, my cab driver explained (in limited English; but that's literally infinitely better than my nonexistent Greek or Turkish) that Pyla, the village where I'd be staying, was the only village on the island that was part Greek and part Turkish. I was thinking "Yay, diversity" when he pointed out that that meant the Turkish army had a base on one side of it, the Greek army on the other, and only UN peacekeepers were allowed to patrol the perimeter. The village is a UN "green zone." And green is good. I assume.

The University of Central Lancashire, England (UCLan, which locals pronounce "U-Clan"), has a satellite campus here which is hosting the conference. Some US universities have things like this; some are cash cows, others serve some other purpose; I suppose I should find out where Berkeley has them and see if there is any good to be done there. But meanwhile, UCLan just opened a new building complex to serve as student residences for the Cyprus campus. And when i say "just opened", I mean the paved road stops right at the edge of the complex, and doesn't extend to the back buildings, where I am. (To get home, I walk along the road until a bulldozer blocks the way, then I turn right.) It's a bit incongruous that in the middle of what is otherwise an open field, there is an Ikea-modern campus and living complex, the latter being the student residences where I'm staying. For the record, my "student" room has the best air conditioning and the best shower/bath I've experienced since leaving the US. The room is pleasantly chilled to 17C, and the shower looks like I can actually stand up in it and enjoy the luxury of hot water streaming from my head to my toes without me holding a shower fixture to make it happen. In terms of the room furnishings, either this is Ikea's largest regional contract or there are many Ikea look-alike stores in Cyprus. But, as with all things Ikea, it's brand-new so everything looks and works great!

Anyway, after dropping off my stuff in my room following a 9+ hour travel day (2 hours early to airport; 3 hour flight delay; 4.5 hour flight; 0.5 hour transit to lodging), I asked the property caretaker if there was somewhere I might get a beer. He mentioned a "casino" a couple of hundred meters down the road, which I'd remembered passing, so I headed that way. The casino was a sad assortment of e-poker machines and off-track betting, and there was a shack of sorts across the street with a couple of guys sitting out in front drinking beer. A fridge case was visible within the shack, so I assumed it was some sort of convenience store, and I asked these guys if I might buy a beer.

They immediately insisted I sit down and join them, and TL;DR over the subsequent 30 minutes they fed me a beer (Efes, same kind I enjoy in my favorite Turkish restaurant back home) and a whiskey (Famous Grouse, actually not a bad brand). Turns out it was just some guys hanging out—Taifik, Kerem, and Tzeiki to be exact, though I've almost certainly transliterated their names incorrectly. Kerem spoke enough English to get by; Tzeiki could do a few sentences; Taifik not a word; but that didn't stop us from having a great exchange, variously mediated by Kerem and Google Translate. Kerem has two grown kids studying in the UK to be a fashion designer and pathologist respectively; Tzeiki is a local big shot of some kind and likes whiskey; Taifik is a man of mystery, or at least of few words; and as the photos suggest, they enjoyed meeting Facelift and hearing about his adventures. 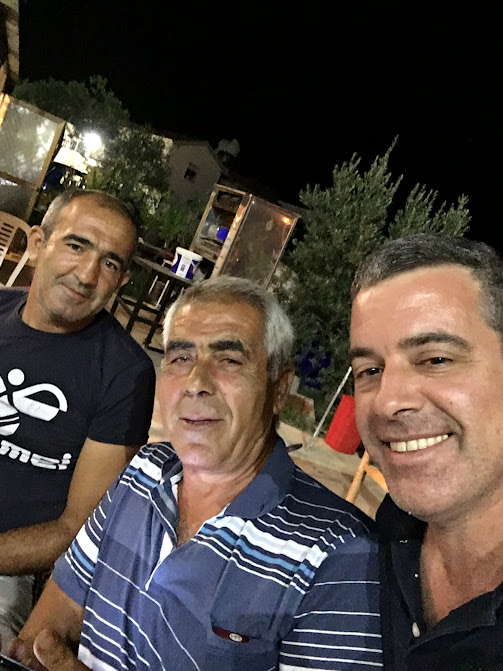 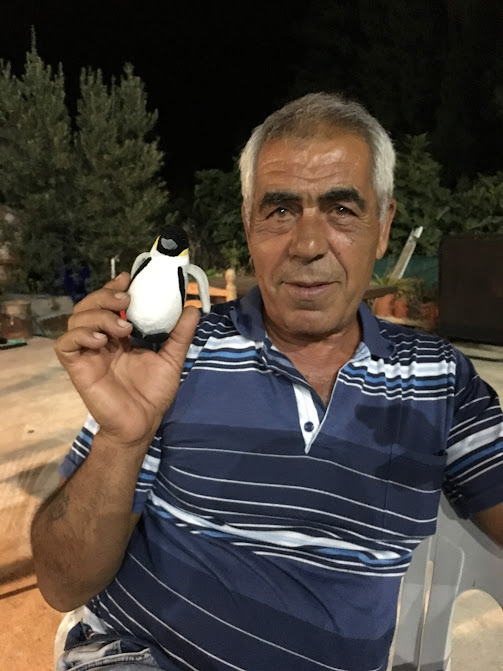 Try as I might, I could not arrange to buy a round. But they said I was welcome to meet them tomorrow at 8pm, same Bat-time, same Bat-channel, for another round. As a matter of international honor as a citizen of the world, I shall do my utmost to be there, bearing some vessel of high quality whisky as a token of my appreciation for their hospitality tonight, which was significant. It was an excellent cultural experience, comparable to when I followed my Mumbai tour guide back to his neighborhood to hang out and shoot hoops with his friends in a far-flung suburb.

The translation gulf between Kerem and me was occasionally too wide, but that's when Google Translate stepped in (all three guys spoke Turkish Cypriot or Cypriot Turkish, as you prefer, and setting Translate to "Turkish" seemed to produce intelligible results).

It was a wonderful 45 minutes, and a reminder that (a) I have yet to visit any place, except maybe Egypt, where booze was not part of the universal cultural get-to-know-you vocabulary; and (b) in the past I've fretted about how the hell we are going to learn to all get along when we can't communicate, but Google Translate has closed a huge chunk of that gap, so what's our excuse now?

The next day and a half I'll be thinking and talking about software engineering education, but I'll take a time out around 8pm tomorrow to be a citizen of the world with Kerem, Taifik, Tzeiki, and a small bottle of whatever goodwill I can find in this town.