Imagine you need to get from the East Village to West 125th Street.  It is rush hour on a Friday afternoon going into a holiday weekend.  Because of a power outage, there are no traffic lights.  Because of a manpower shortage, there are no traffic cops available to direct traffic.  There is no subway.  The buses have no special lanes.  In fact, the lane divider lines have been mysteriously erased from all the streets, even five-lane streets like Second Avenue.  For every car, there are numerous scooters or mopeds.  A very few people are not in motor vehicles, but on camels. (Yes! camels!) Pedestrians are blind and deaf and cross streets and freeways heedlessly.  This is what it is like to drive anywhere in Hyderabad, at any time.

Actually, it's worse, because the main "right of way" rule seems to be: The hell with you, I'm coming through.  Even in LA, these drivers would each be considered insufferable jerks, but since everyone behaves the same way, they don't consider it rude.  Amazingly, we saw no accidents, though many near-misses.

The result is that getting anywhere is stressful, even if you're not driving, due to frequent short stops, lane swerves, and constant, truly constant, honking.

But I digress.  Today we visited the Charminar, the four-towered monument that is Hyderabad's icon, and Chowmalla palace, both built by the Nizams, the wealthy Persian dynasty that traipsed down here in the 15th century and is responsible for making Hyderabad the only Muslim-dominant area in India.  We got some photos and I shot a bit of video from the observation deck of the Charminar to give you a sense of the baseline level of noise and traffic here. 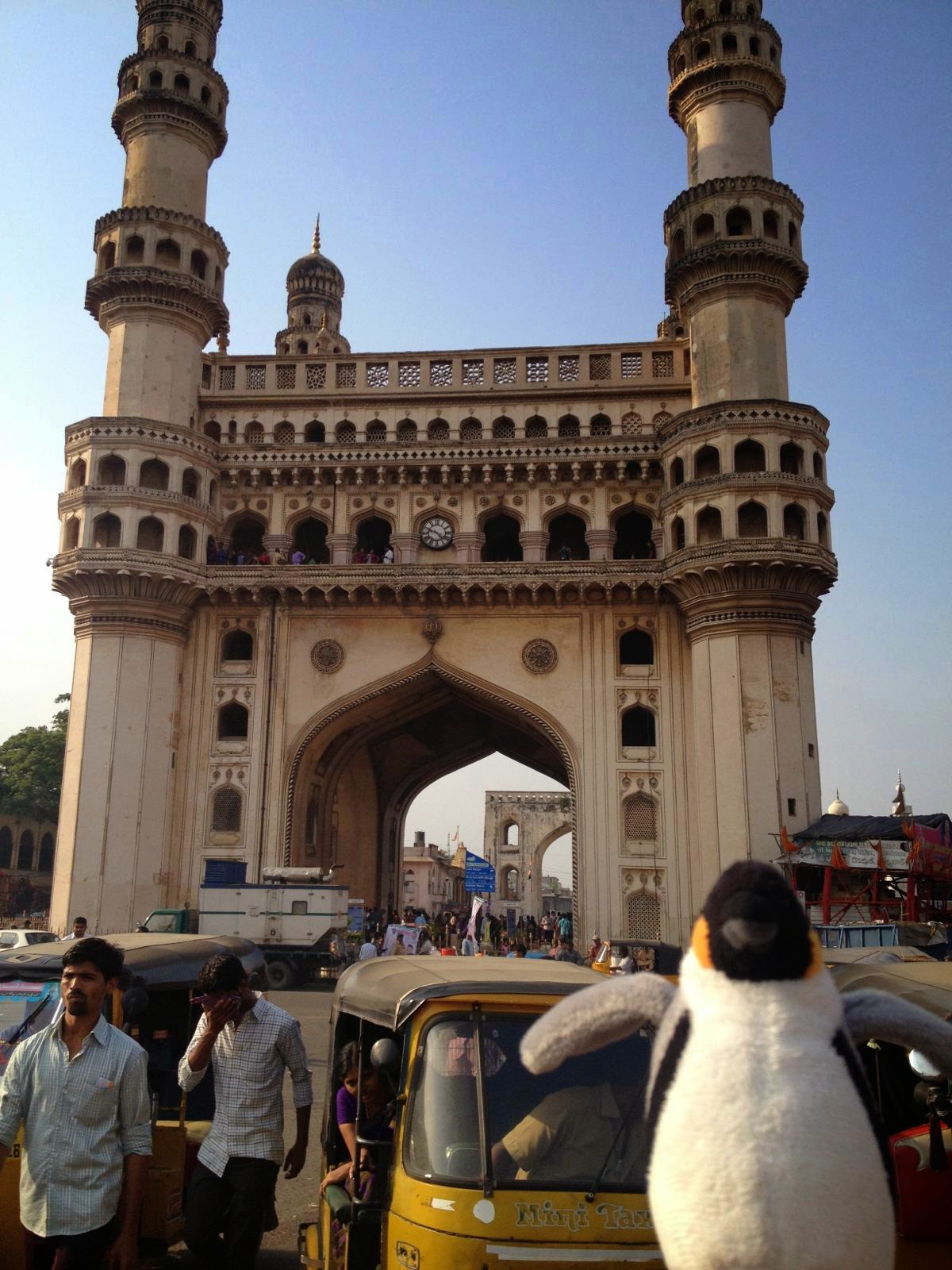 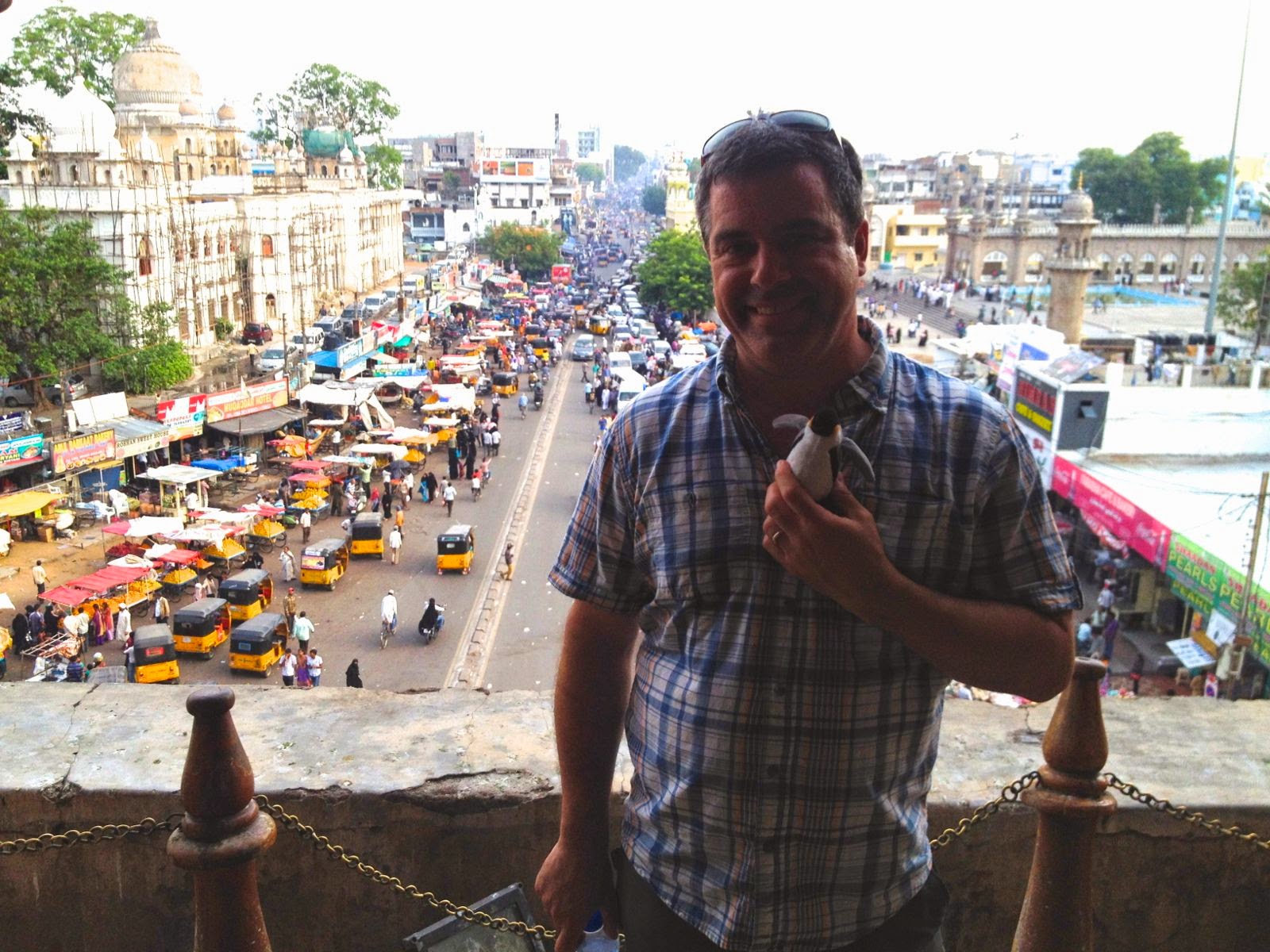 The palace was OK, but I'm usually not interested in the vintage car collections of old royalty (the tour was designed for midwesterners, I think).  Penguin thinks it's too la-di-da for his taste.  (If you look closely at the duck pond picture, you can see a cormorant diving in the background.) 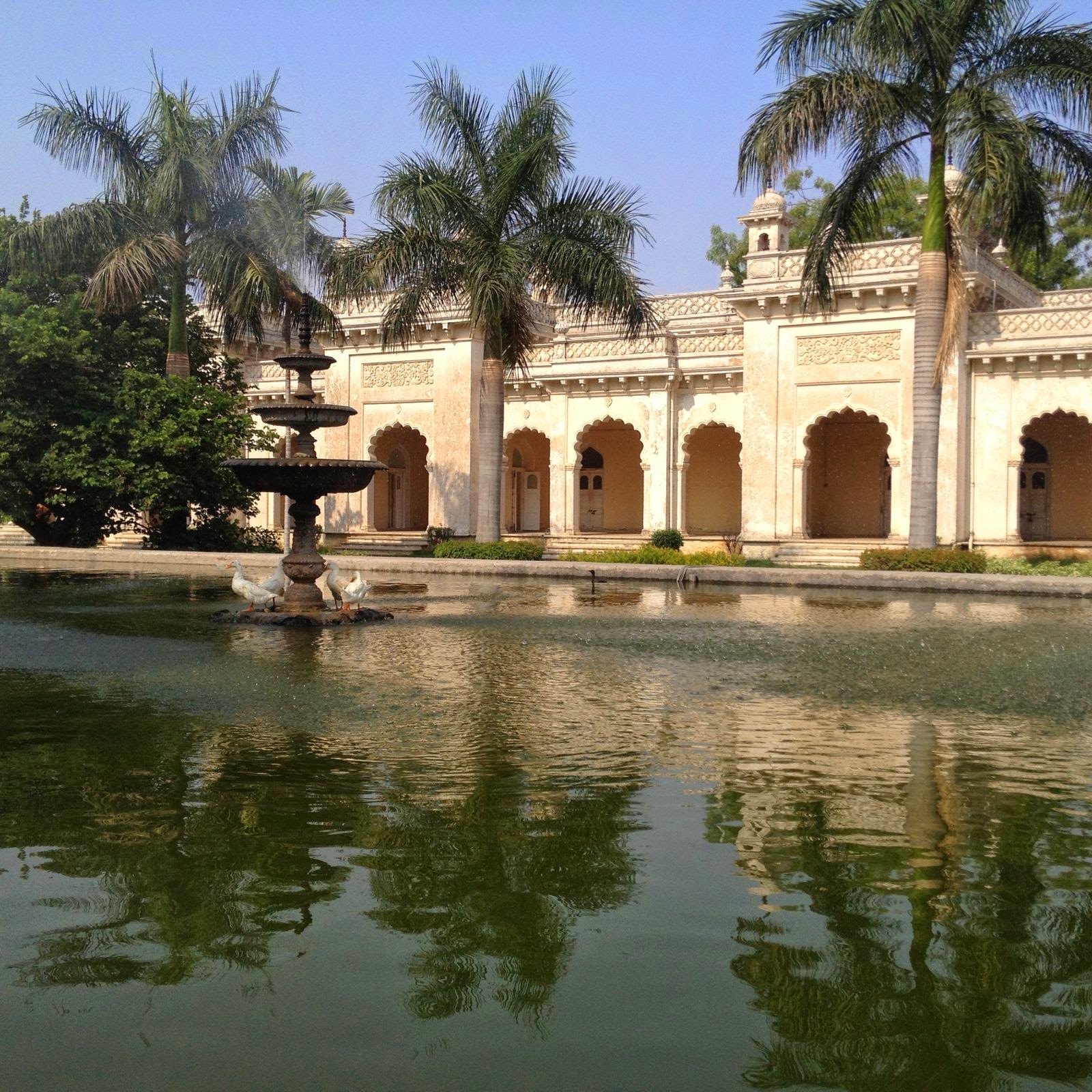 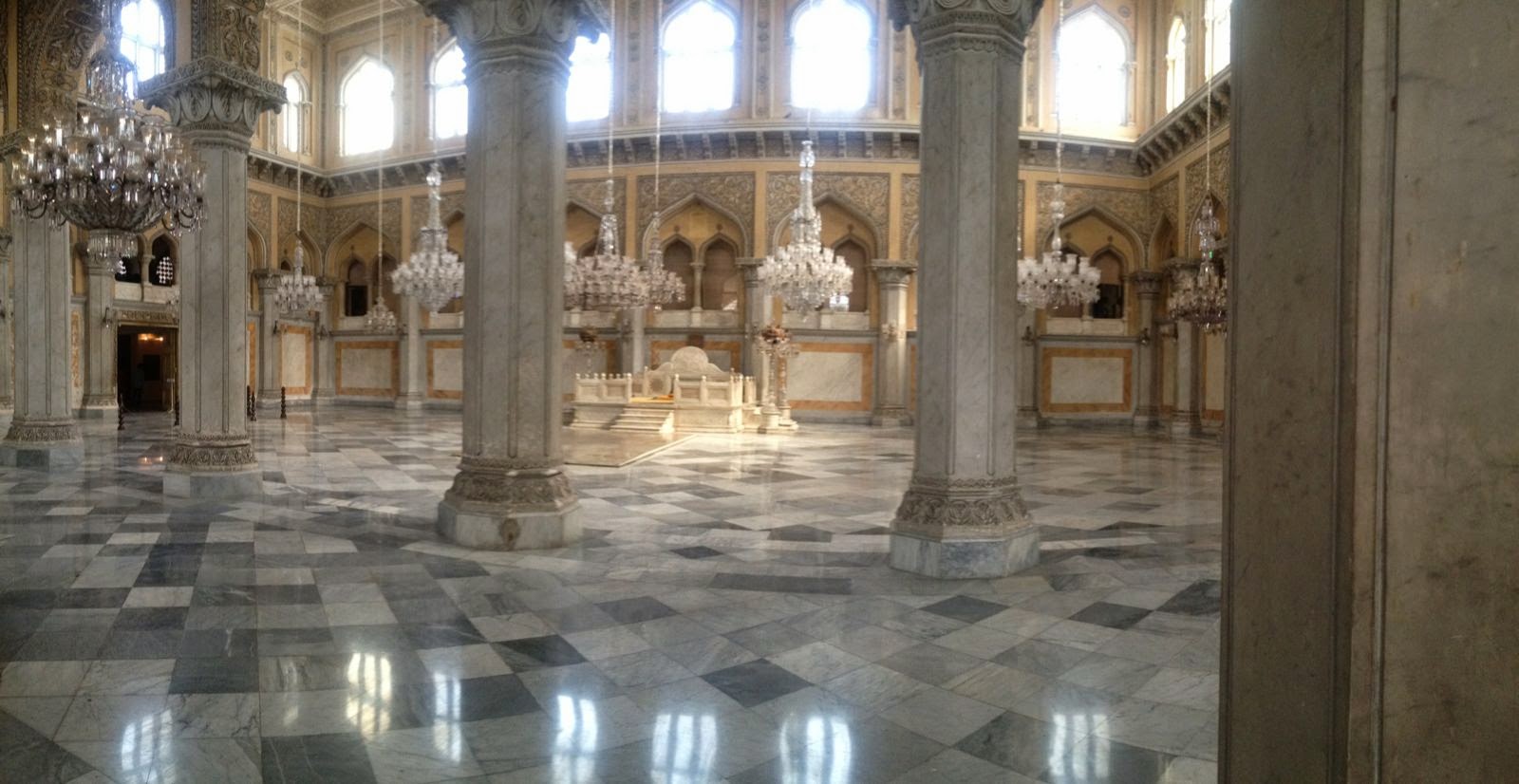 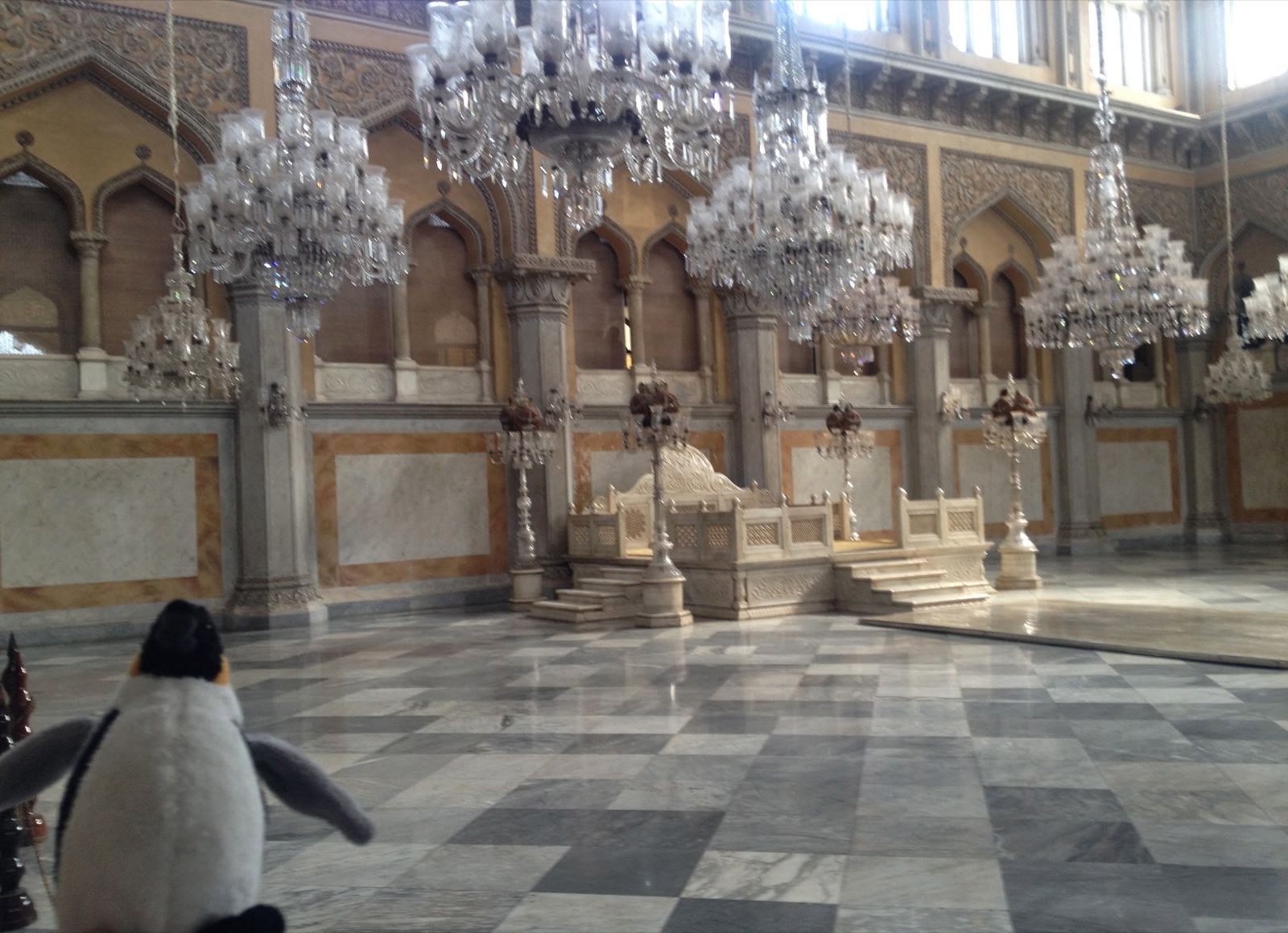 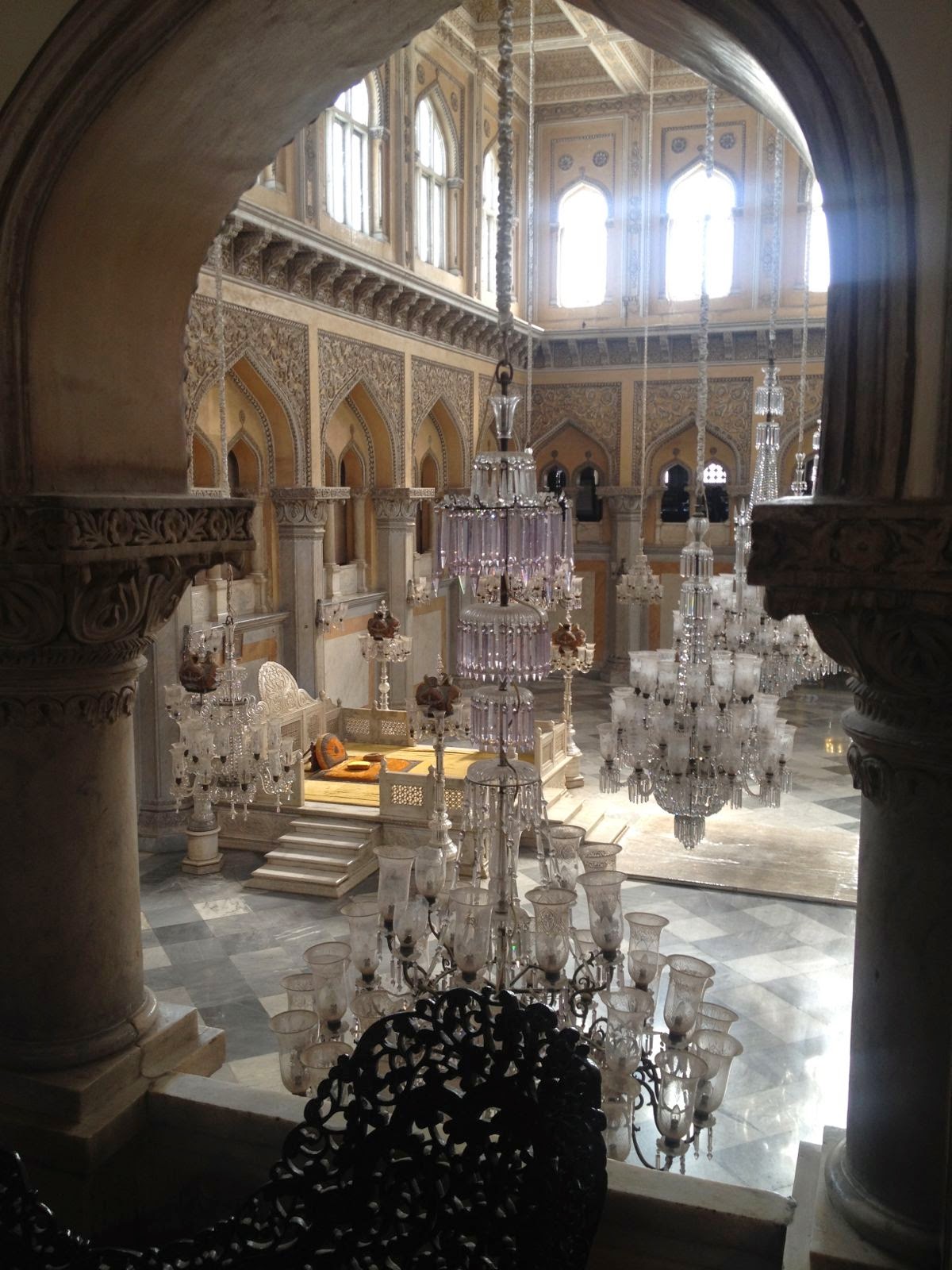 I endured it because I was looking forward to the walk back to the bus via the street market.  Although the market itself turned out to be unremarkable (compared, e.g, to Otavalo), it gave me an opportunity to look around and realize what an infrastructural catastrophe is going on here.  Nothing looks finished.  The roads are good, but the sidewalks are usually unpaved.  And no grass or trees - just dust.  In a hot dry climate, this gets kicked up as particulate smog, more so when sweepers try to sweep in front of their shops.  Also, while the roads and paved areas were reasonably clean, dust attracts trash, which attracts more trash, which attracts goats, of which we saw many.  (They are all privately owned, usually for dairy, and the owners let them roam free and eat what they may.)  It seems that paving the sidewalks or planting them with natives would be a low-cost way to control trash and smog.  When buildings are built, the owner cannot always afford to build the whole building, so they build the vertical rebar supports to the maximum planned height of the building and then build the subset of floors they can afford, hoping to come back and add more later.  The result is almost every building, even brand-new modern construction, appears to be sprouting rebar plants from each corner of the roof... 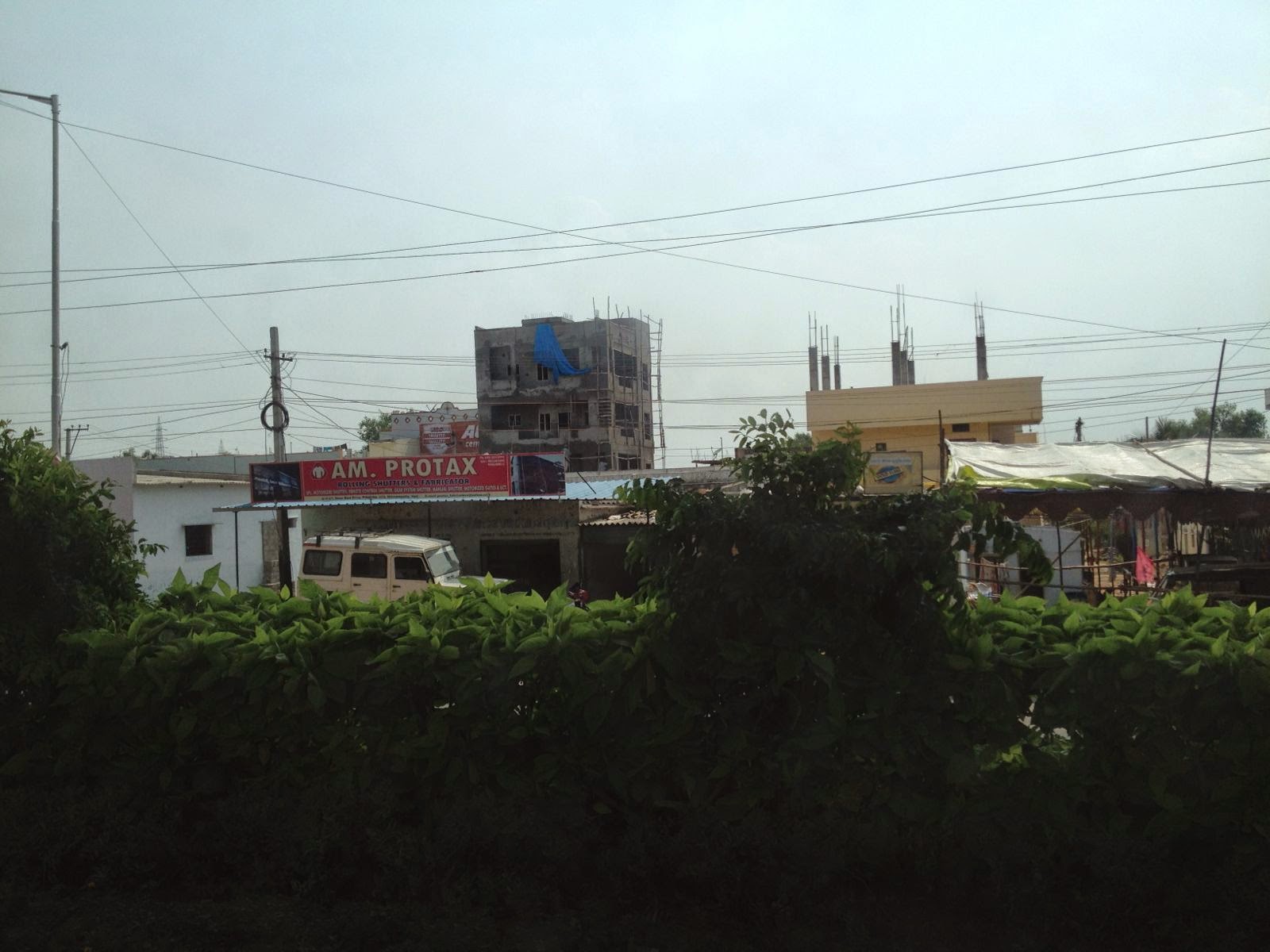 ...except for the new Department of Fisheries Headquarters building... 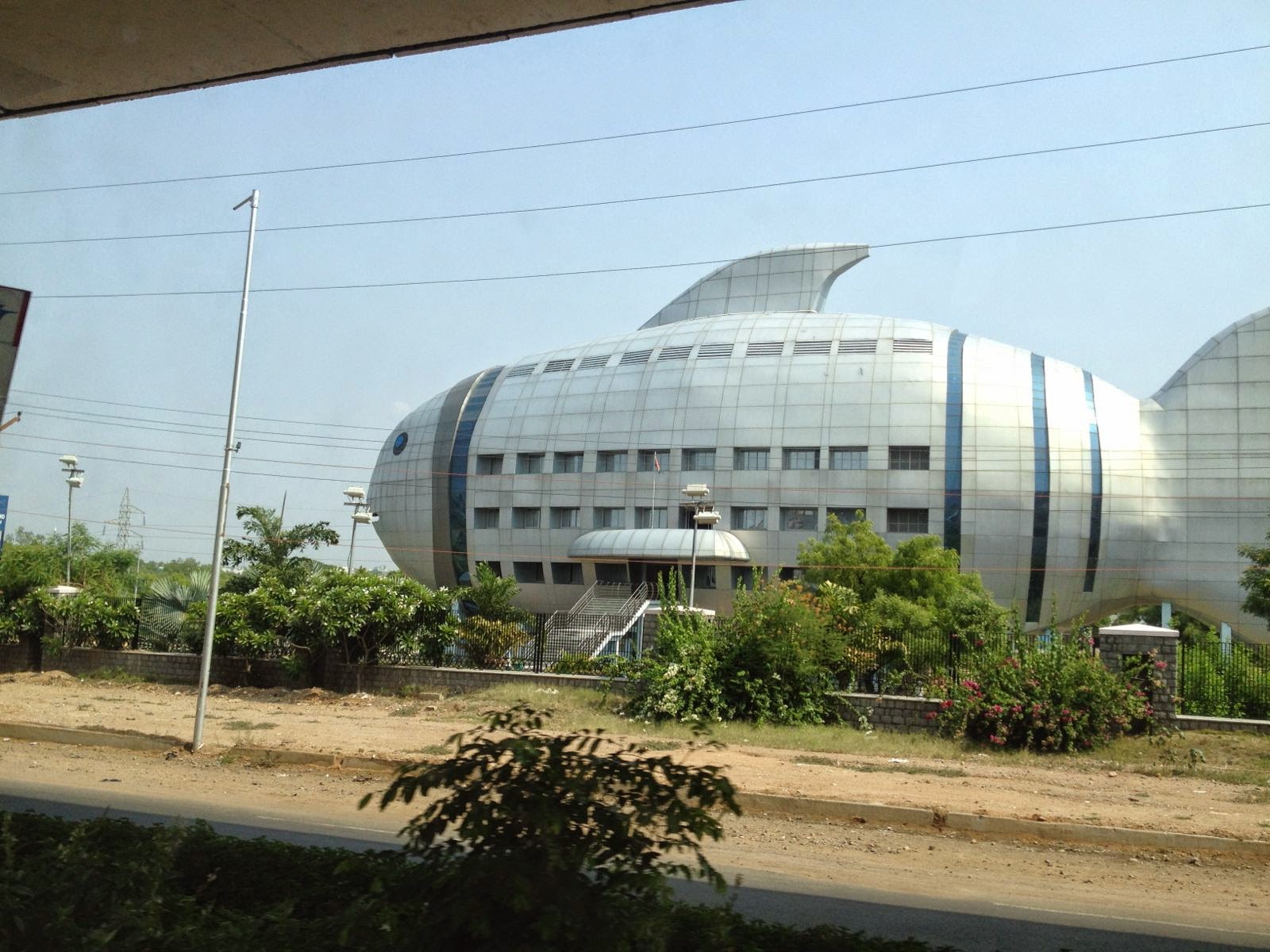 There are as many buildings under construction as there are buildings on which construction appears to have been abandoned; I wondered why they don't finish those buildings before starting new ones.  All the electrical wires are strung on poles aboveground; imagine housing density comparable to the Mission where the electrical cable for each individual apartment or office in a building is strung on wires.  As a result, when it rains hard, blackouts are inevitable; we had a brief one even in my hotel, which is part of the ultramodern convention center built only in the last few years.

The downside of my Hyderabad stay is that everything interesting to see requires a harrowing 45 to 60 minute (each way) car trip, and by the time we get back, the last thing I want to do is get in another car to go to dinner (the conference center is greenfield development in the middle of nowhere, so there is absolutely nothing to walk to; though the upside is it's absolutely quiet at night.)

I'm sure Mumbai will put me closer to India.  Looking forward to that part of the trip once I'm past my presentations!
Posted by Armando Fox at 5:58 AM