After our morning arrival in Mumbai, it was just a few blocks to the hotel, although it took a bit of orienteering to figure out in which direction.  Mumbai felt cooler than Hyderbad: here it feels like a day that's too hot for Miami, whereas Hyderabad felt like a day that was too hot for Mercury.  But it's deceptive: Mumbai is much more humid, so the effective heat is actually worse.

What distinguishes Mumbai's look from Hyderabad's is the presence of colonial buildings left over from the Brits, not least of which is Victoria Terminus, the railway station at which we arrived and the national headquarters of Indian Railways.  Here's a quick panorama of the waiting room, and a  nighttime picture:

In any event, as soon as we checked in and freshened up, it's out for a stroll.  Mumbai is about as hectic as Hyderabad, but it has more of a New York vibe.  In Hyderabad the locals wanted photos with us Westerners; in Mumbai no one gives me a second look.  You can navigate the sidewalk crowds by focusing on a point ten feet ahead of you, just as in Manhattan.  Everyone is going somewhere or doing something; no one is just sitting around.  It's pretty cool.  But hot.

Emboldened by five days in a row of no stomach problems, probably due in part to good judgment and lots of Pepto-Bismol tabs, I had some street food on the way--the kinds of things that would be appetizers in an Indian restaurant, like samosas and fried dough things. 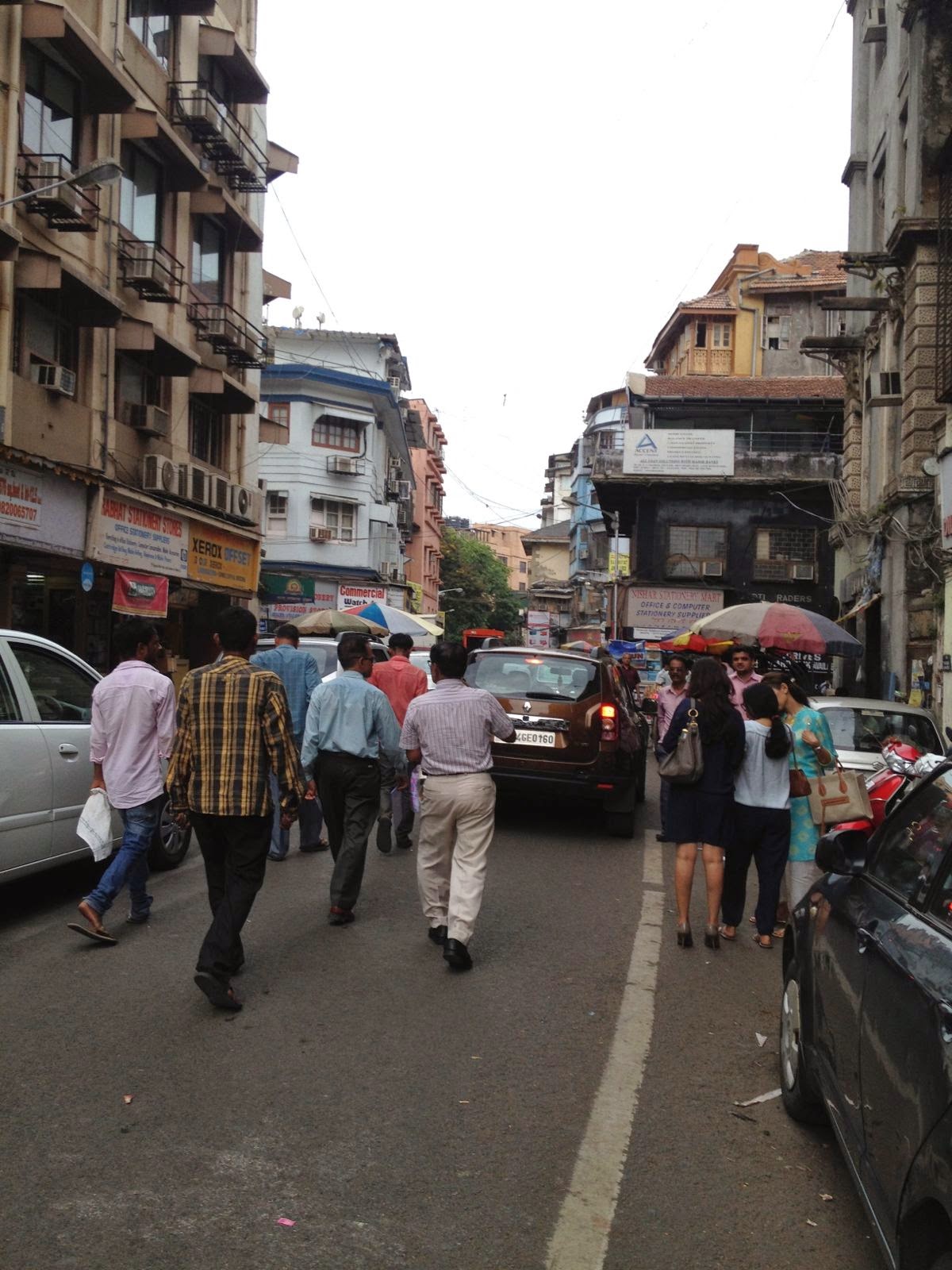 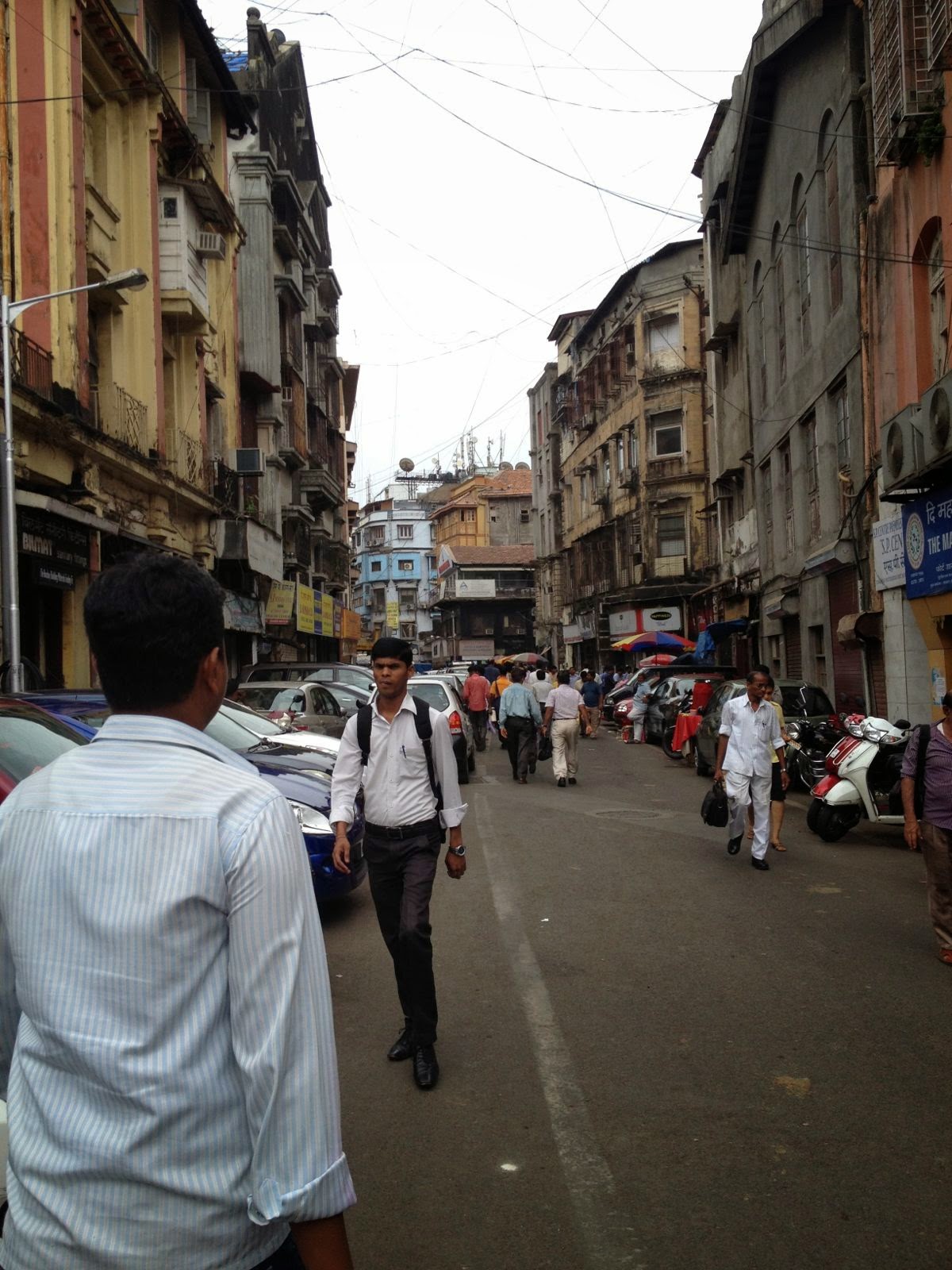 In the nineties, when Bombay was officially renamed Mumbai, many colonial-area names were scrapped in favor of local ones, and "VT" was renamed Chhatrapati Shivaji Terminus (yes, the double "h" is correct) or CST, in honor of a 17th century Maratha king who is seen as a sort of proto-nationalist and in whose name many people committed controversial acts of nationalist violence, kind of like Jesus.

Our 2km walk to the harbor passed a number of these buildings, including Churchgate, the other major rail station.... 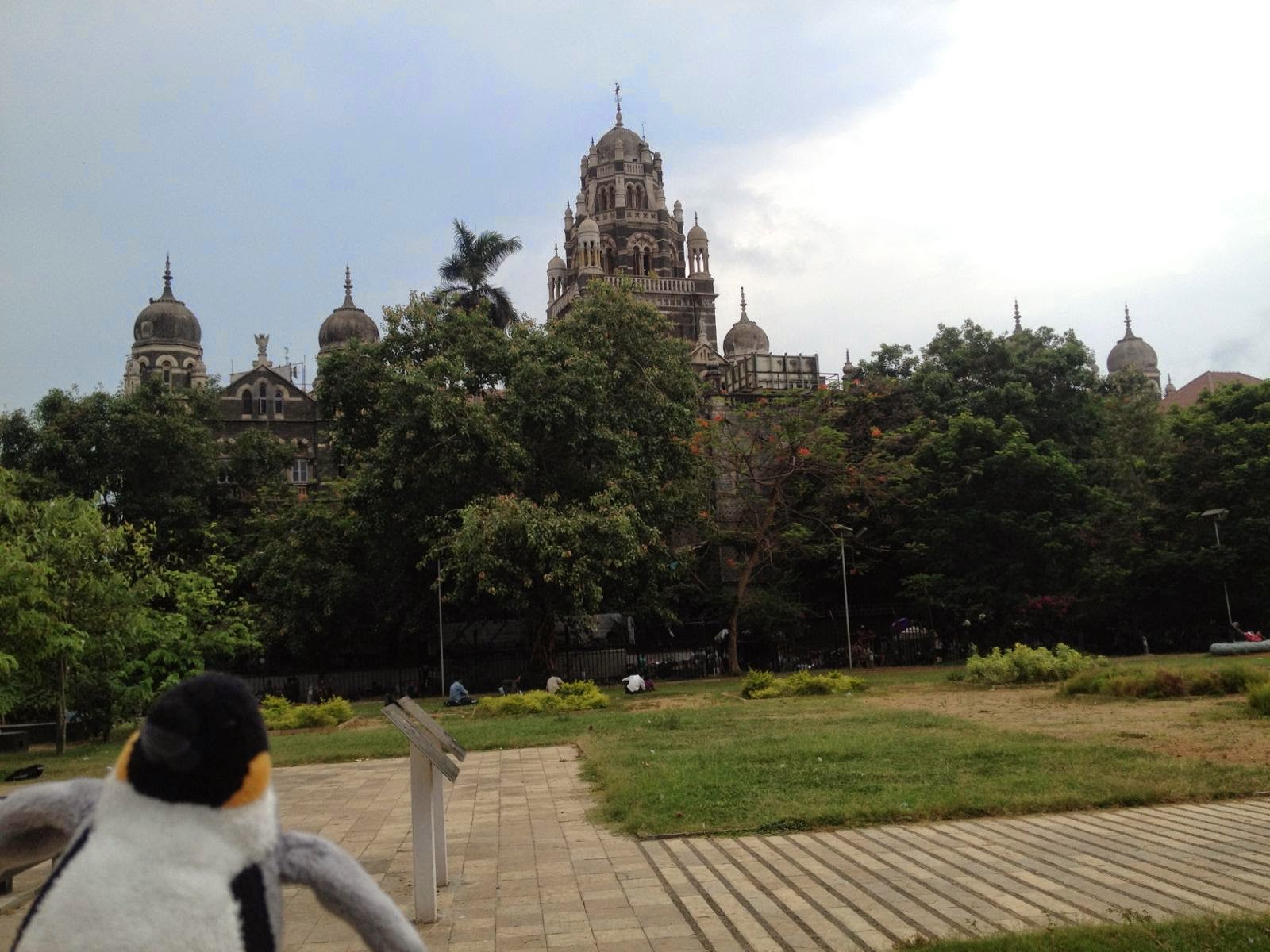 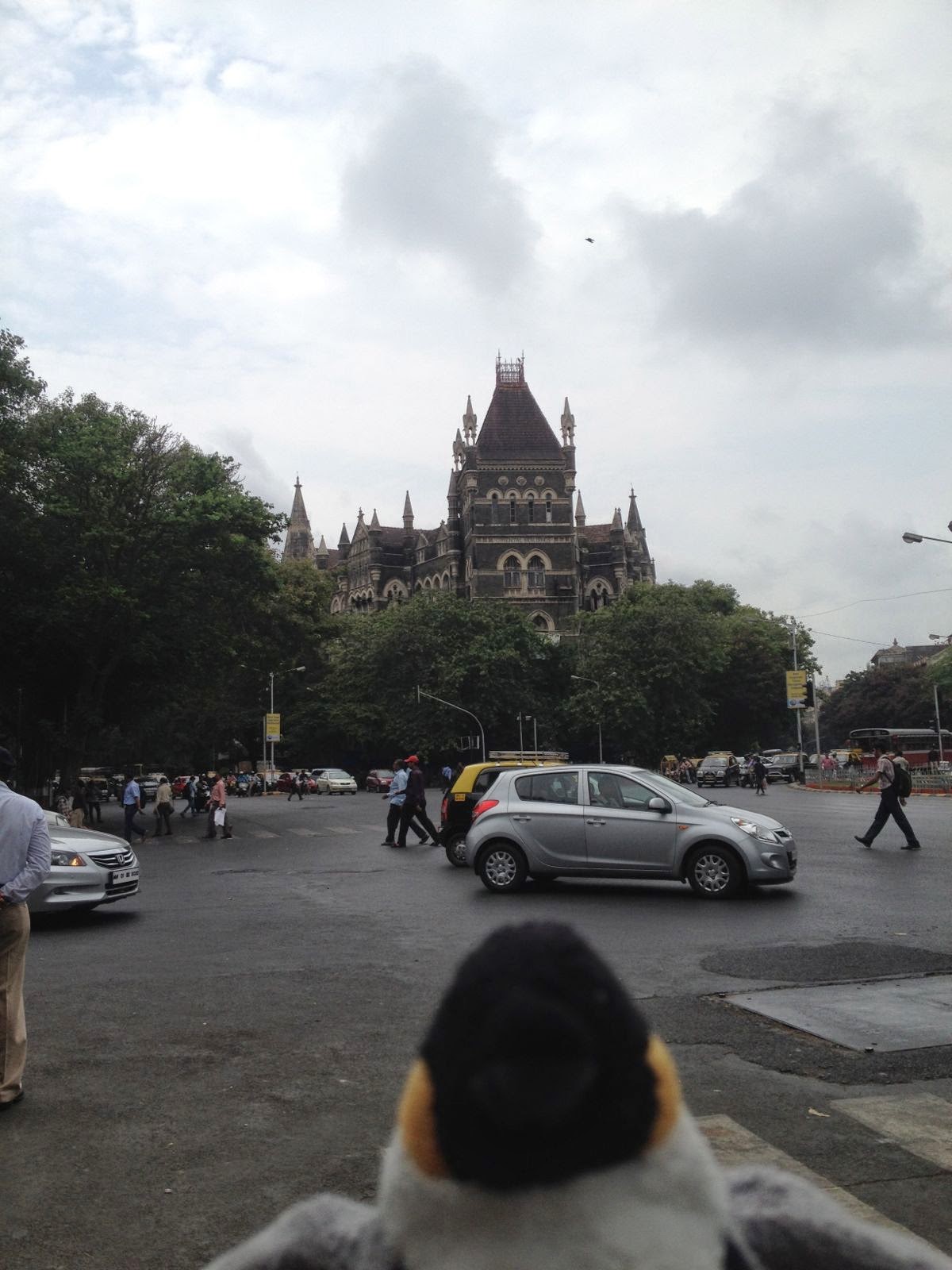 ...before ending up at the Gateway of India, erected by the Brits in 1911 in honor of Queen Victoria's landing there. 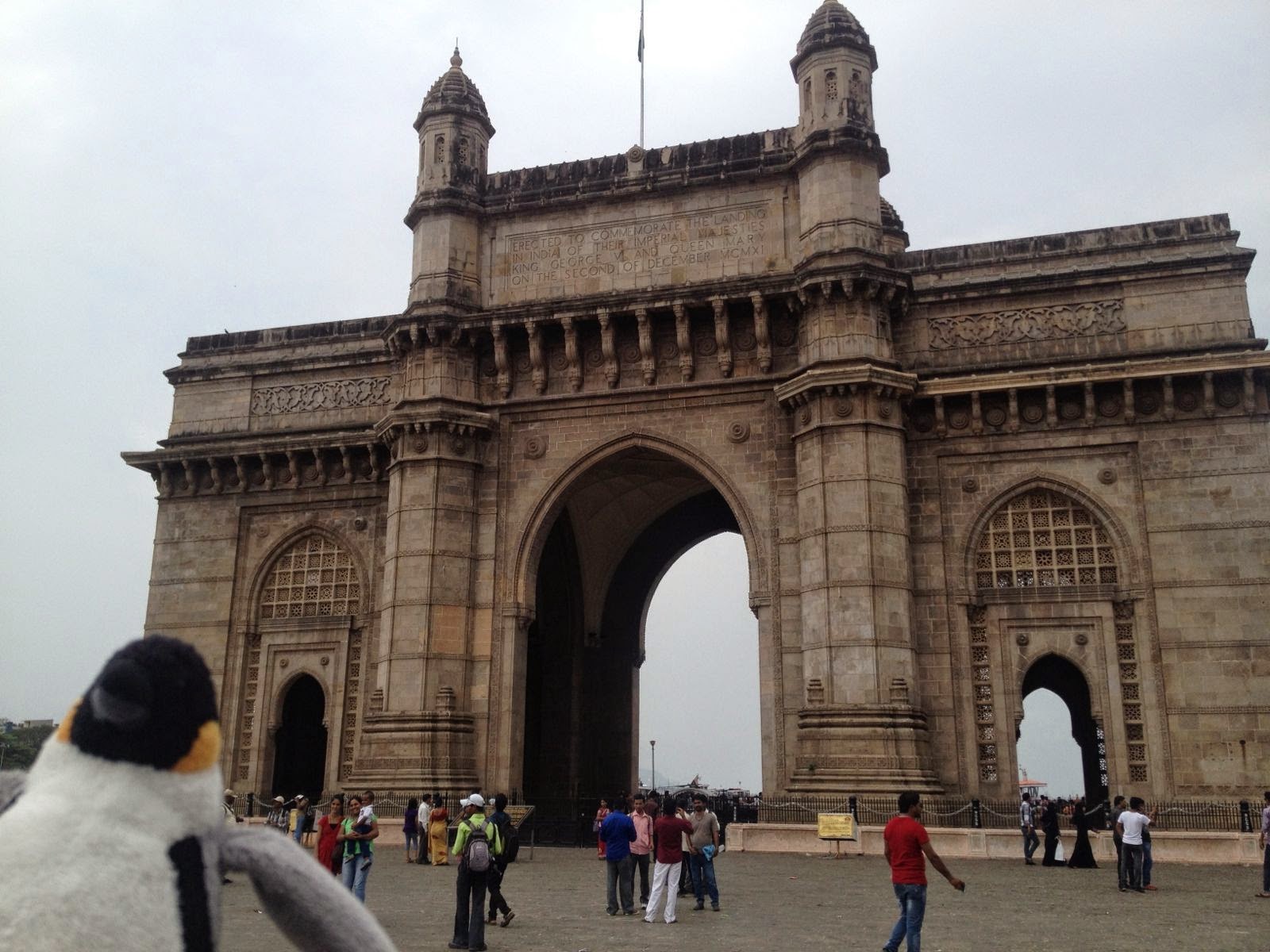 It is so hot here that my shirt was absolutely soaked through after a two-hour walk, so I had to come back to the hotel to change and rest up a bit before the Mumbai at Night tour I'd booked. As it turned out, I was the only one who had booked—in fact, I had seen exactly two other Westerners in Mumbai since arriving here.  So I had a lot of opportunities to chat with Manu, my guide, who is working full-time as a guide while also training to be a hair stylist.  He could only afford eight years of formal education—his parents worked for a patroness who subsidized his tuition at a private school, which accounts in part for his good English, since the public schools generally instruct in the local language or Hindi and have minimal English coverage—and he's determined to get fulltime work with his certification and stay financially independent.

He took me to some really cool places, including Chowpatty Beach (actually Girgaum Chowpatty, since the Hindi word "chowpatty" actually just means "beach"), where people come to sit on the sand and eat snacks and enjoy the sunset—but not to swim, as the water is absolutely toxic with raw sewage.  And also with millions of Ganesh statues: during the festival whose name I forget that honors the god Ganesh, people keep small plaster statuettes of Ganesh in their houses for several days, and then ritually sink them in the water at the end.  Given there are something like 10 million Mumbaikars, the bottom of Chowpatty Beach must be several inches deep in plaster Ganeshes.

This is supposed to be the spot to eat the street treat bhel puri, which is puffed rice tossed with fresh raw onions, cilantro, and other potential gastrointestinal disasters.  It was delicious and I've had no problems. 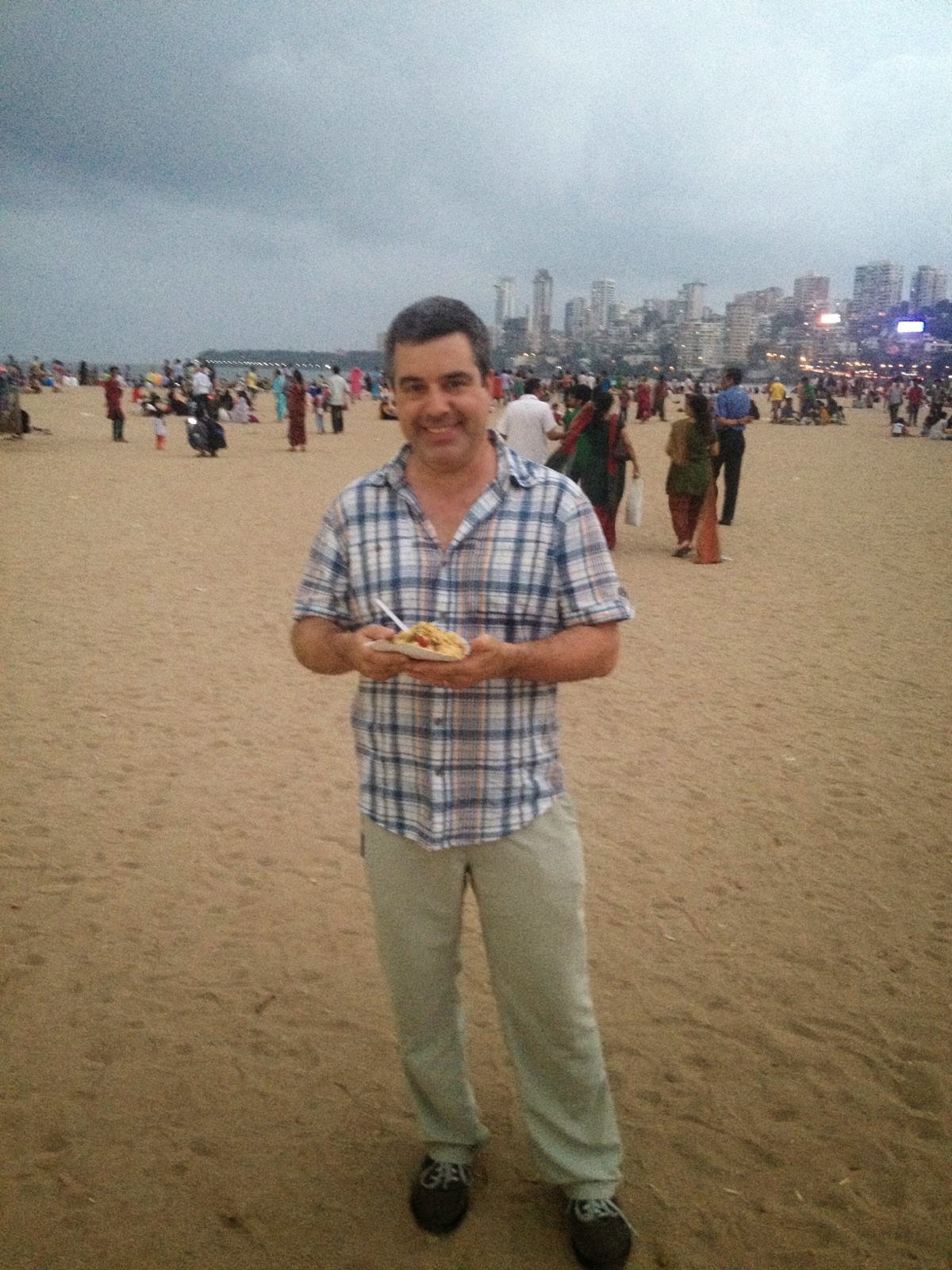 After a visit to a Hindu temple and a Jain temple, both of which were appropriately peaceful, he took me to Banganga Tank, a reservoir filled by a natural spring.  This reservoir dates from the 12th century; its myth is that the god Ram, on a military mission to Sri Lanka, stopped here desperate with thirst; he asked his brother Lakshman to bring water, and Lakshman shot an arrow (baan) into the ground and water gushed forth, thereby creating a tributary of the sacred Ganges (hence, banganga).  Malabar Hill, the ancient neighborhood where it's located, is one of the few spots in Mumbai where you cannot hear the constant honking of car horns, and full of charming narrow lanes.  One imagines this is what Mumbai was like before the automobile. 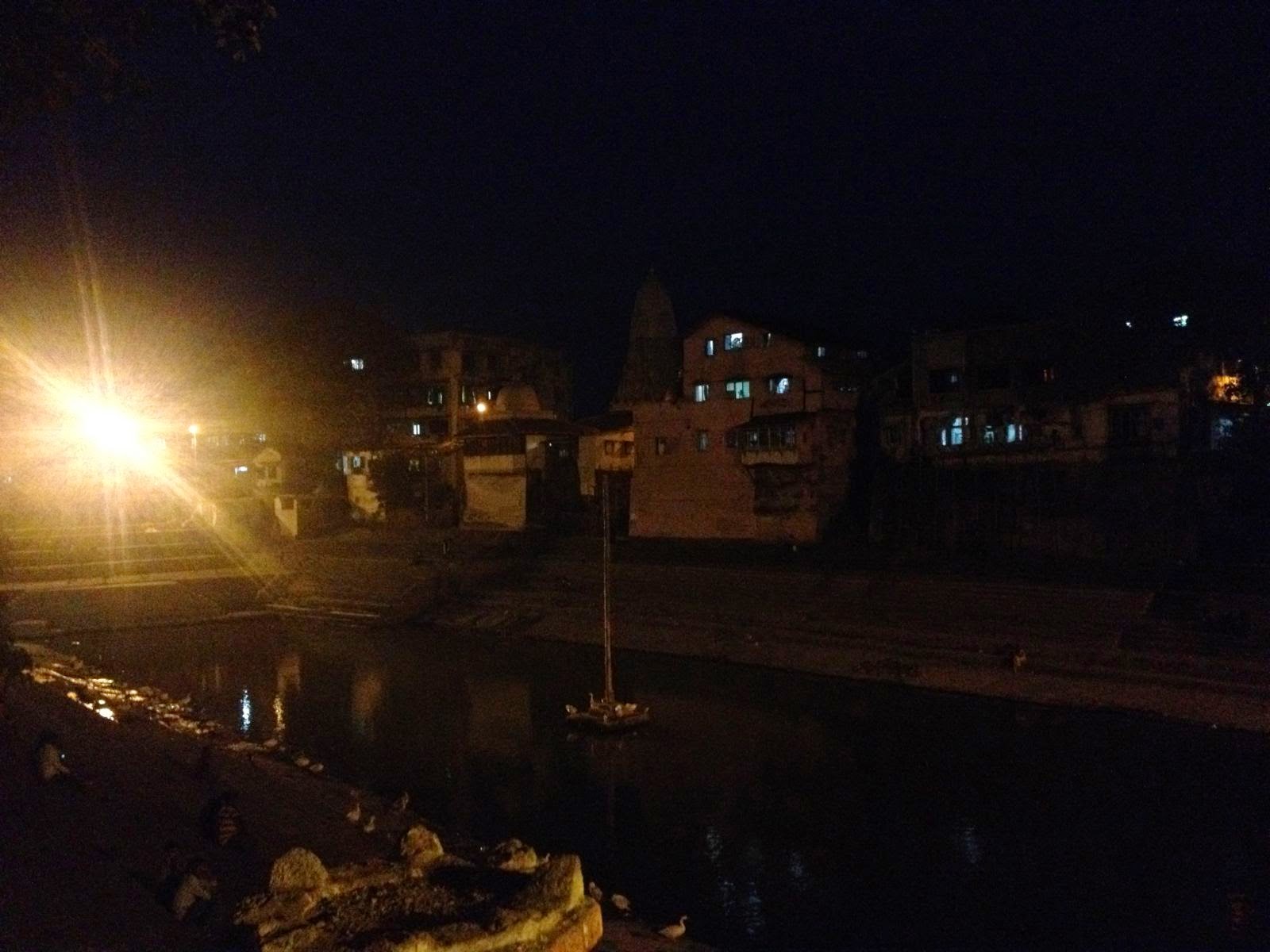 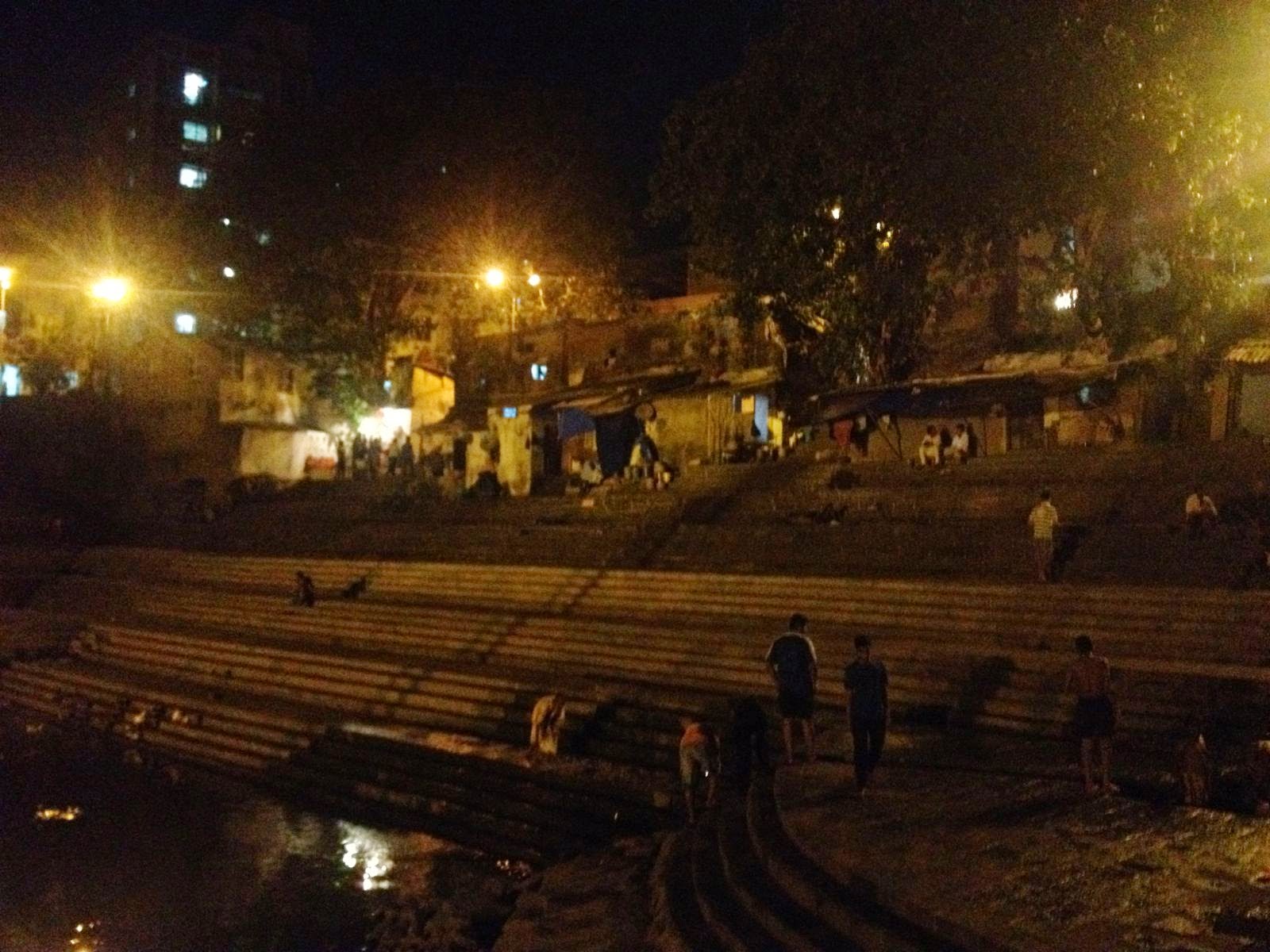 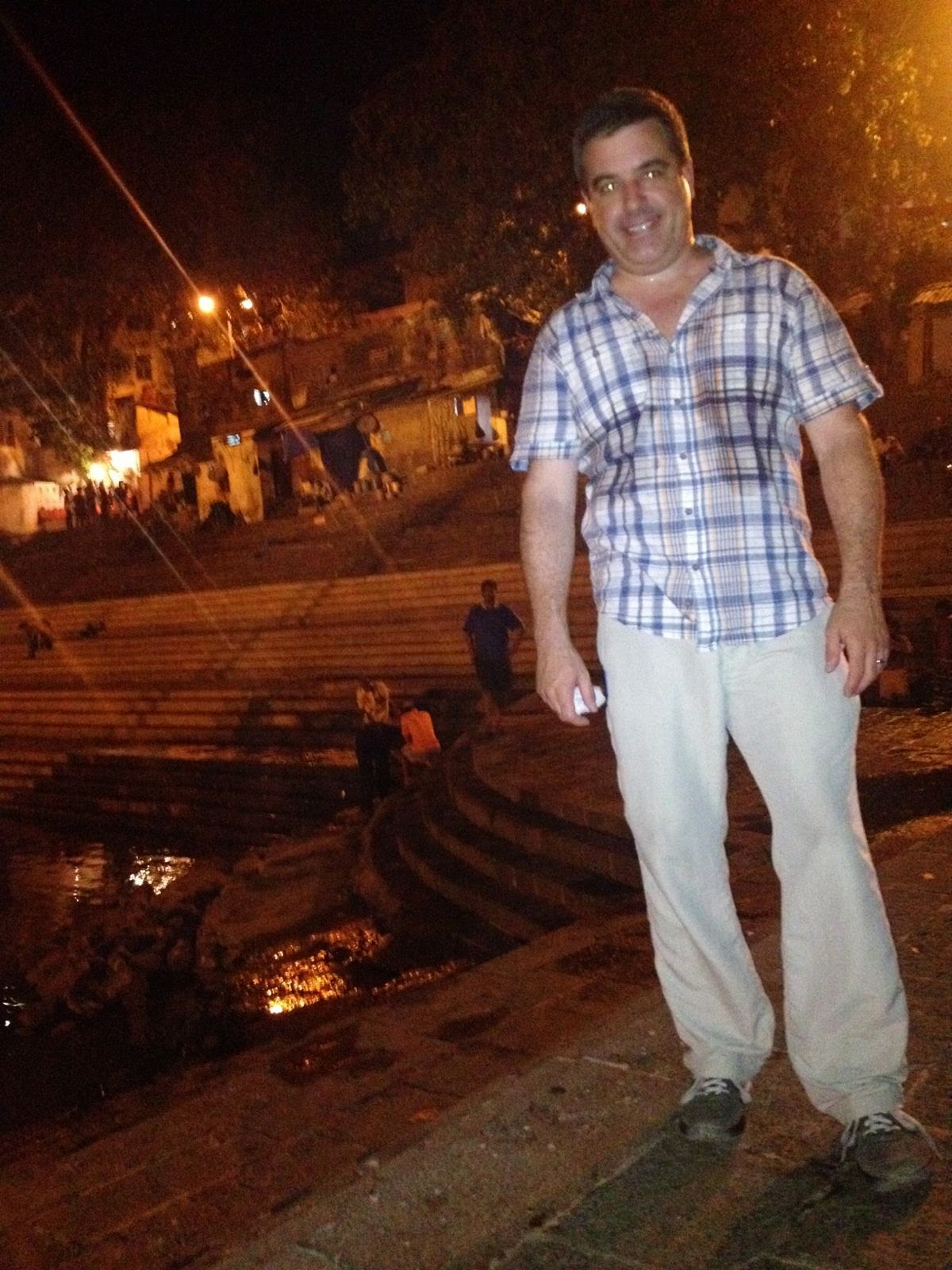 ...and a final stop at the "Hanging Gardens" overlook on Malabar Hill, from which you can see the so-called Necklace, the curved road along the Mumbai waterfront stretching out behind me.  Chowpatty Beach is approximately over my right shoulder where the unusually bright spot is. 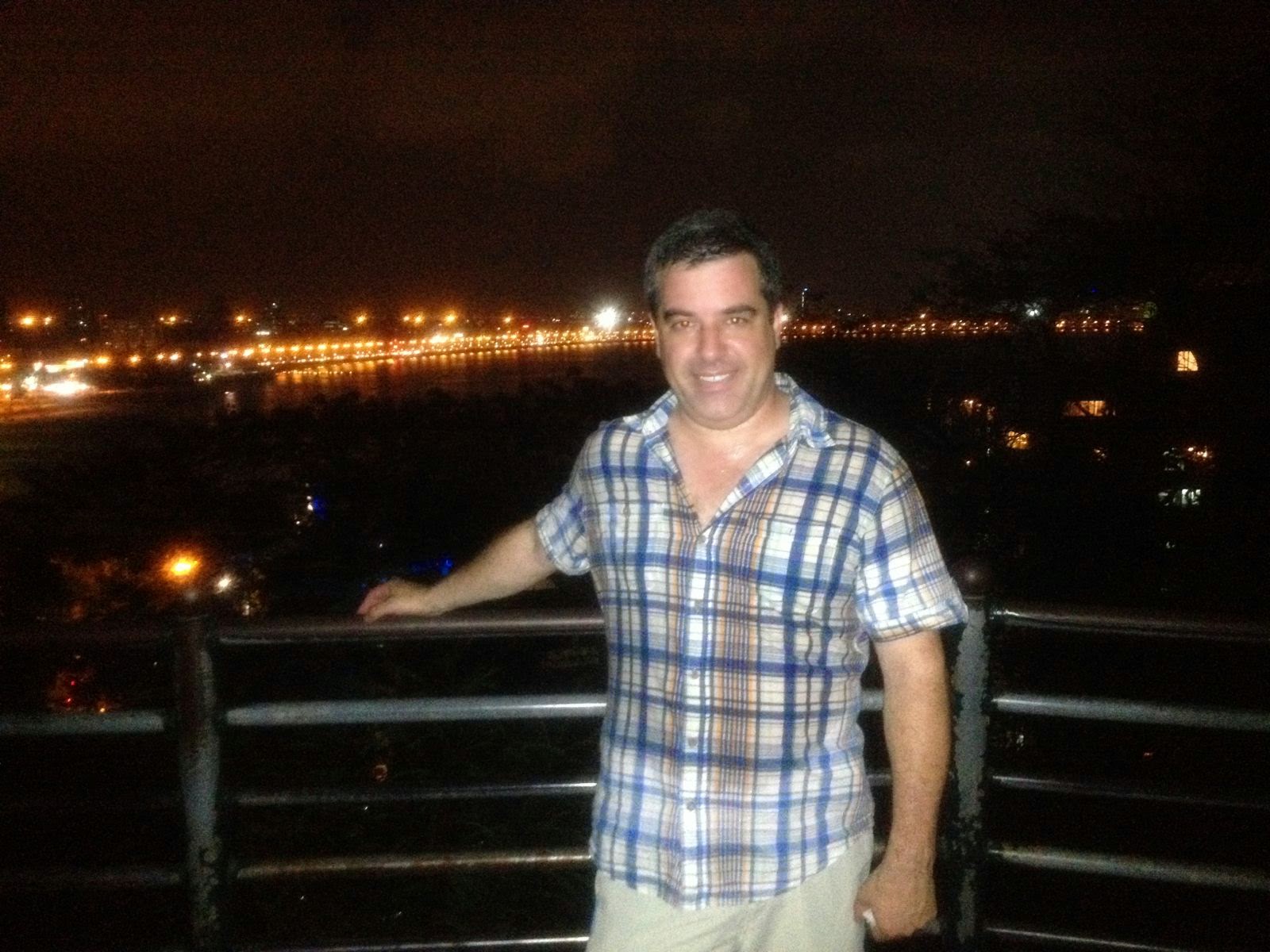 The best was saved for last.  I had mentioned that after the tour was over I wouldn't mind having a beer, and offered to buy one for Manu too.  During the tour I had spoken of how I like to try to do local things and meet local people when traveling; so he asked if I'd like to come back up to where he lived—15 minutes north of the center—and have a beer with him and his friends.  I couldn't refuse, and within 15 minutes we were in the courtyard area of a group of buildings that in any US city would probably be called a slum, more for the amount of trash than actual poverty; and there I was having beers with Manu and his crew—Nitin, Aakash, Rajesh, a couple of others, all of whom were amused when I had Manu explain that I knew not one but several students in the US with each of those names only a couple of these guys spoke English (including his brother).  (I just realized I didn't get a picture with Manu himself; he's taking this photo) 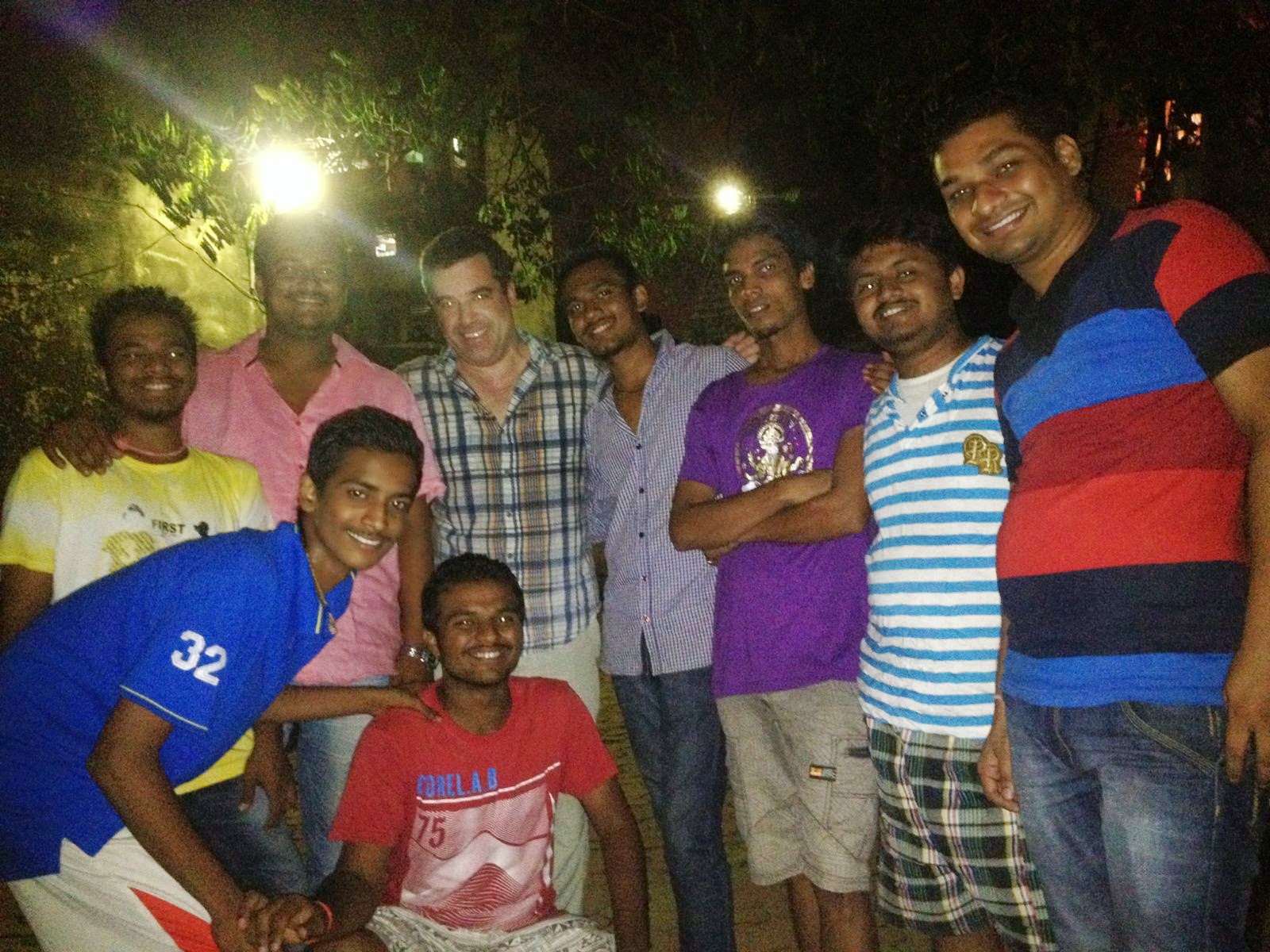 With all these guys being in their early 20s, I asked where the girls were.  Culturally, unless you are raised by semi-westernized wealthy professional parents, girls are kept indoors with their parents while the guys go out.  So men and women basically never interact socially until the courtship of their arranged marriage.  It explains a lot about some Indian students I've known in the US.
Posted by Armando Fox at 10:11 AM