Hyderabad is unusual in being a Muslim enclave within an overwhelmingly Hindu country.  This is due in part to its history: in the 15th-16th centuries it was invaded by the Persian Sultan Quli Qutb, and the Qutb dynasty ruled the area for 170 years.

The Qutb were great builders, and one of the things they built was this set of 7 tombs for their rulers, perhaps the only known tomb complex housing an entire dynasty in one place.  The setting and structures are run-down, but Iran is collaborating with India (in view of the Persian heritage of the setting) to fix it up. 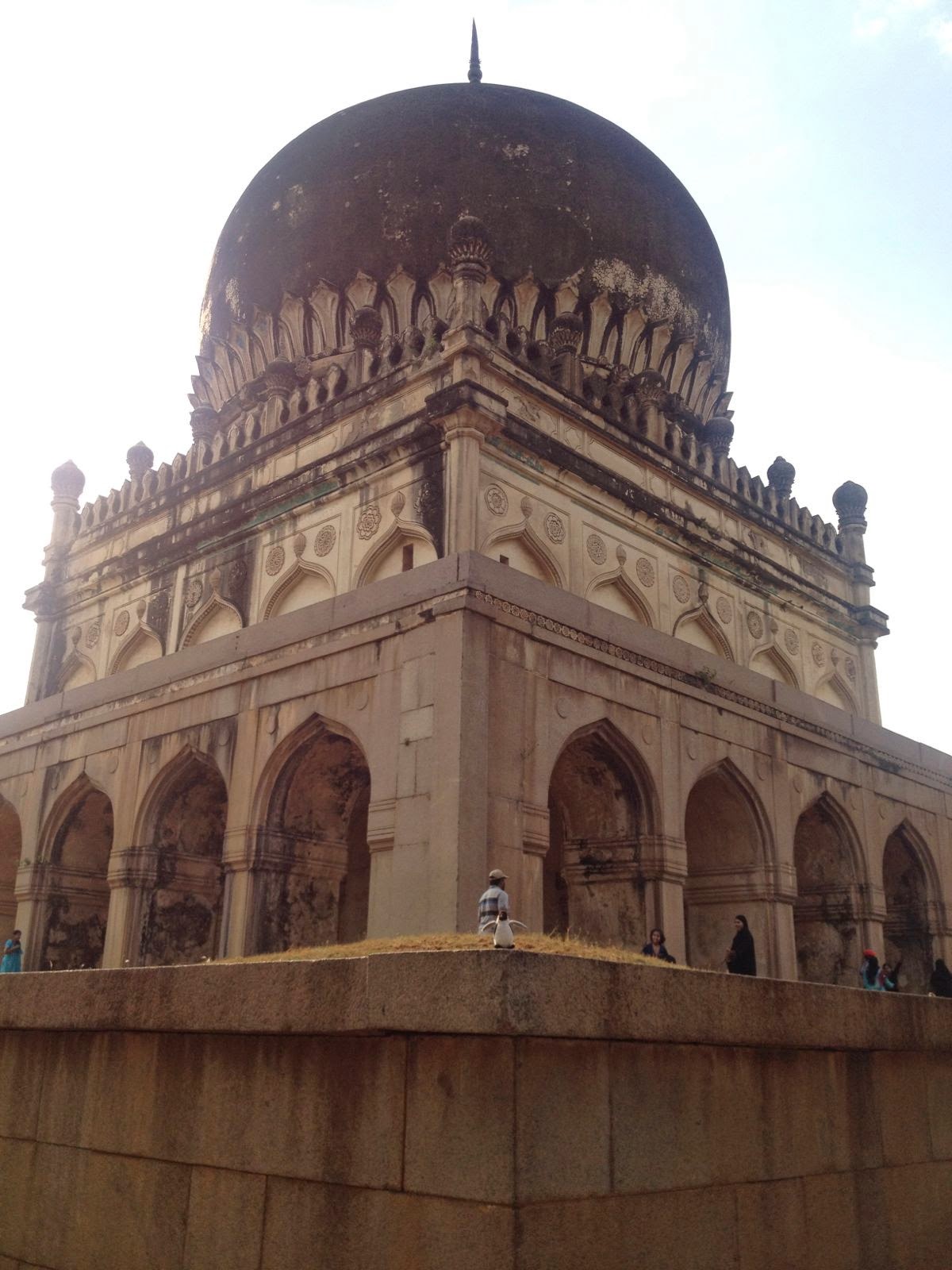 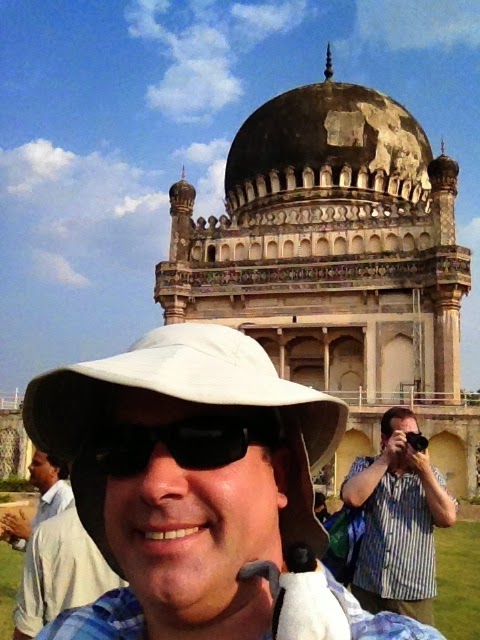 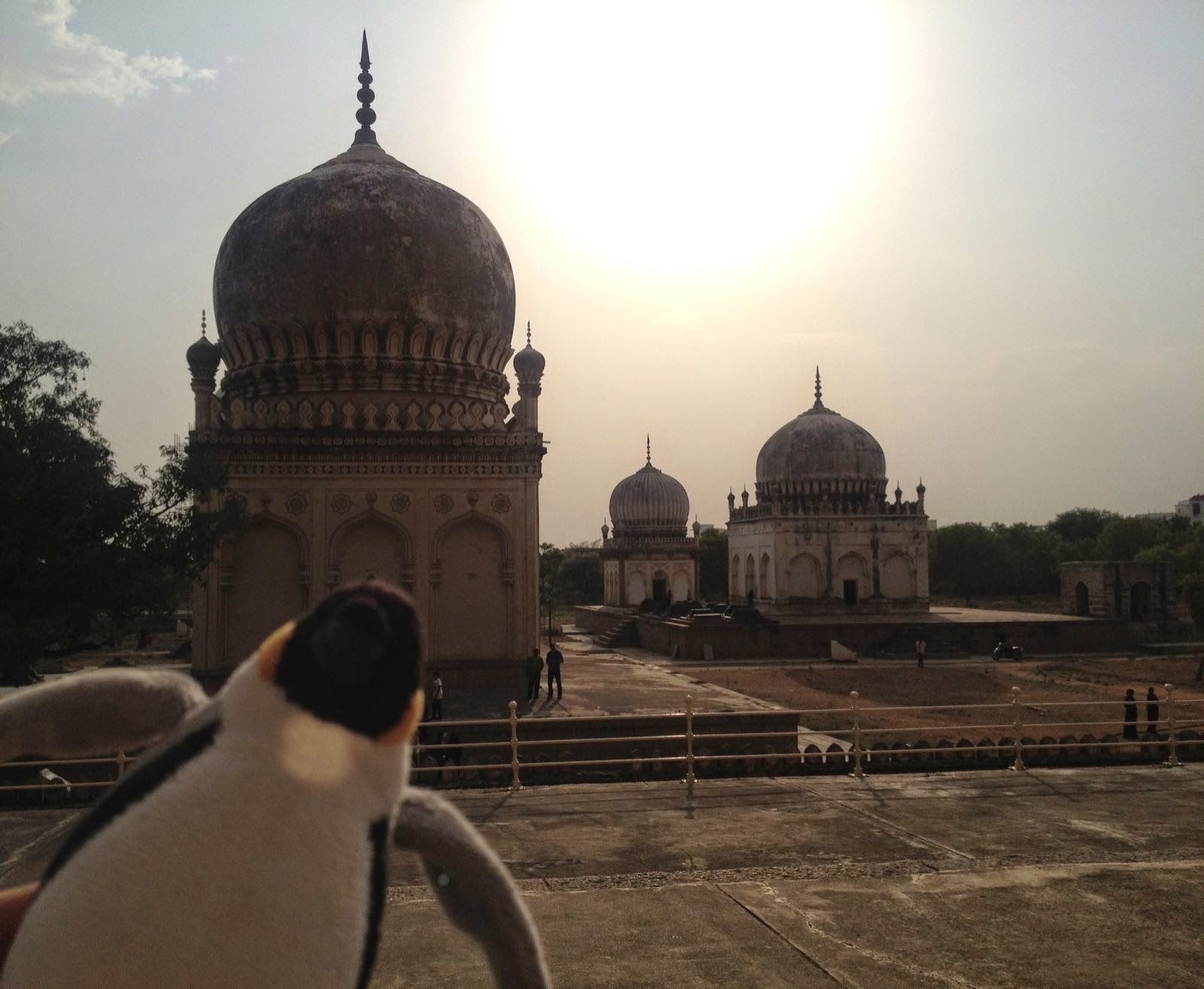 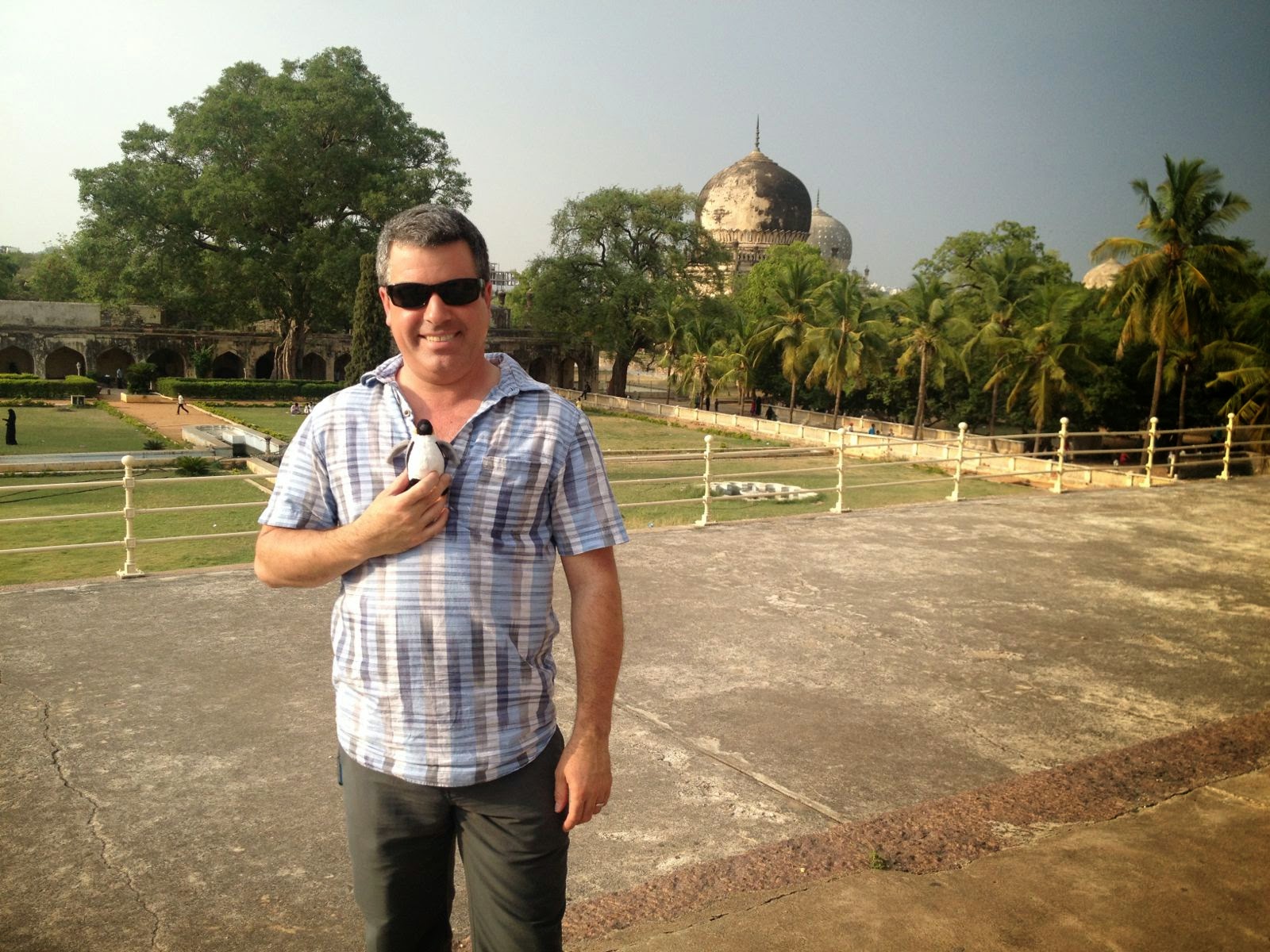 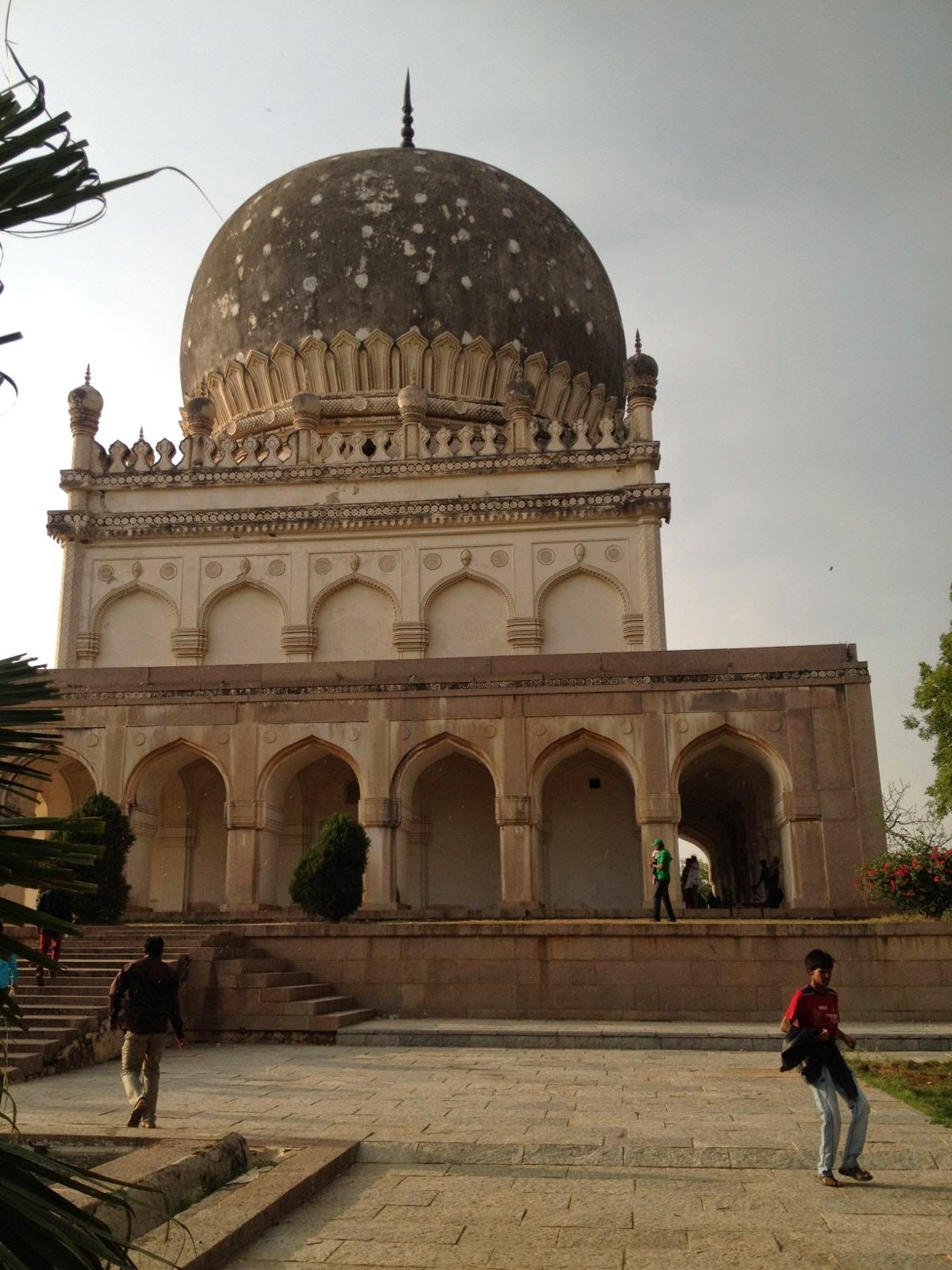 They also built the Golconda Fort, originally in the late 1500s but it was fortified and enhanced over a period of sixty years.  There is an outer wall around 7km in circumference, but inside the inner wall is where the main fort is.  The Qutb and later Mughal sultans ruled from here, more or less cut off from the common people, until the Persians were kicked out once and for all when the British Raj took over the vestiges of the fading Mughal empire in 1857. 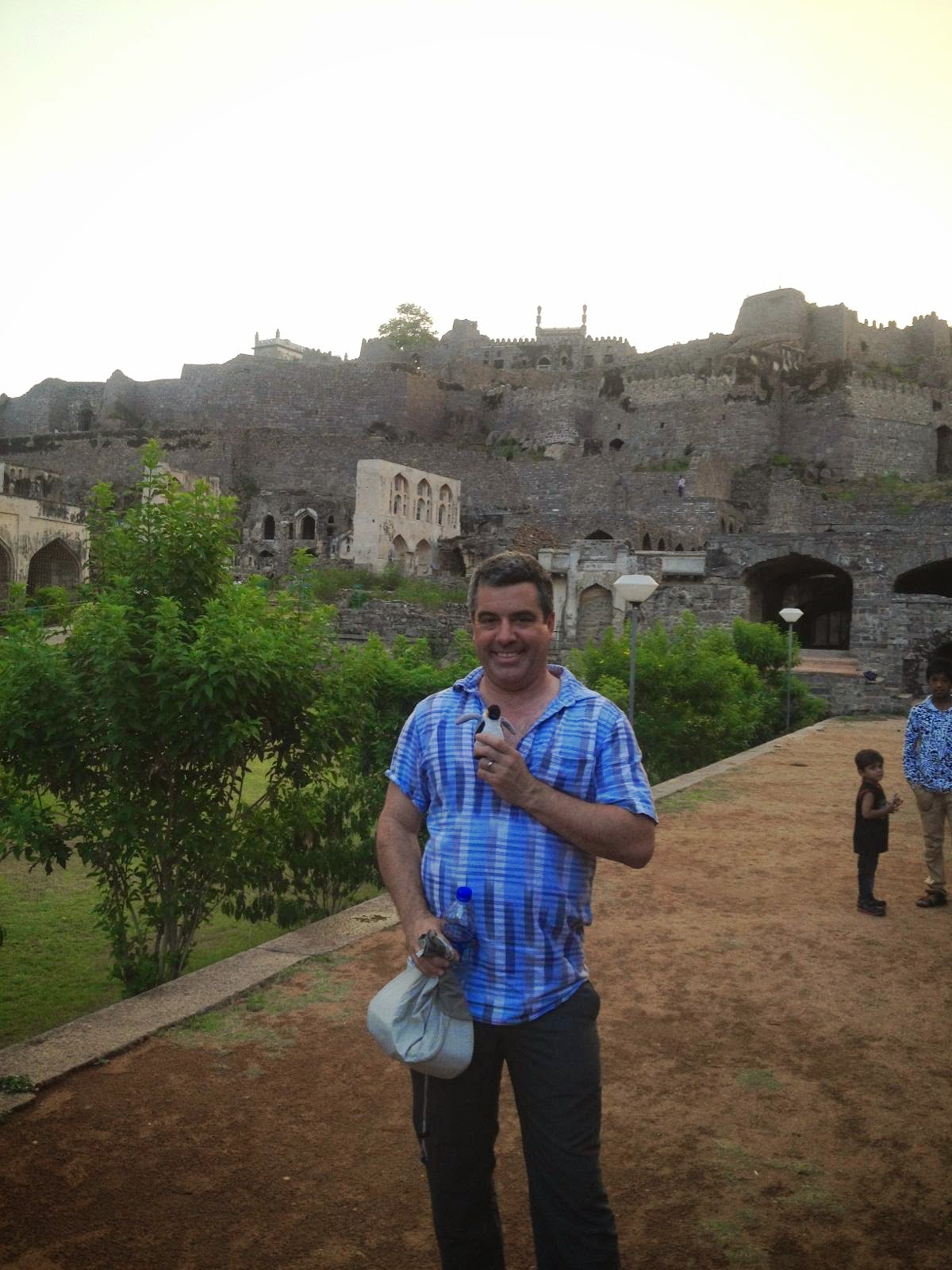 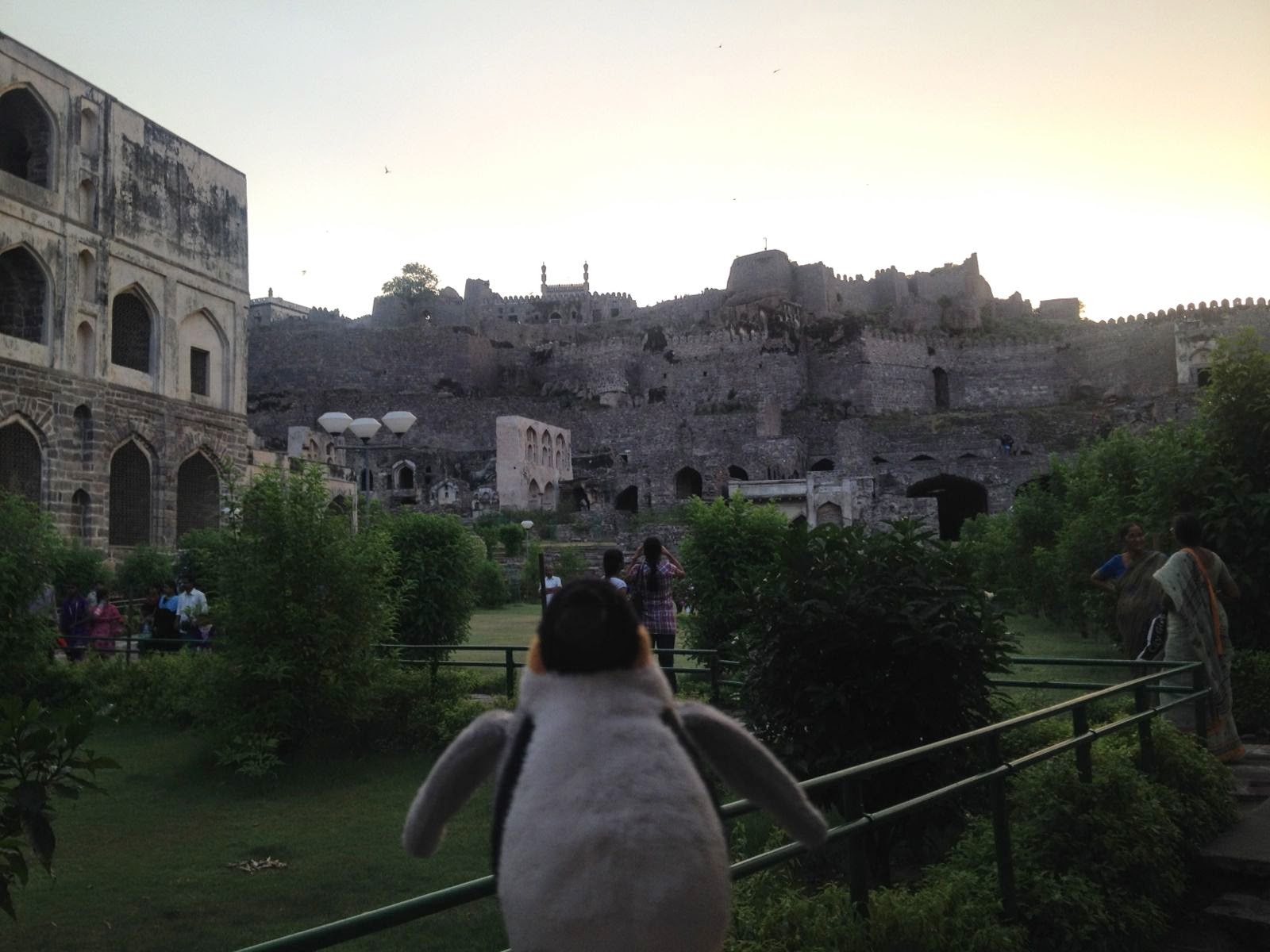 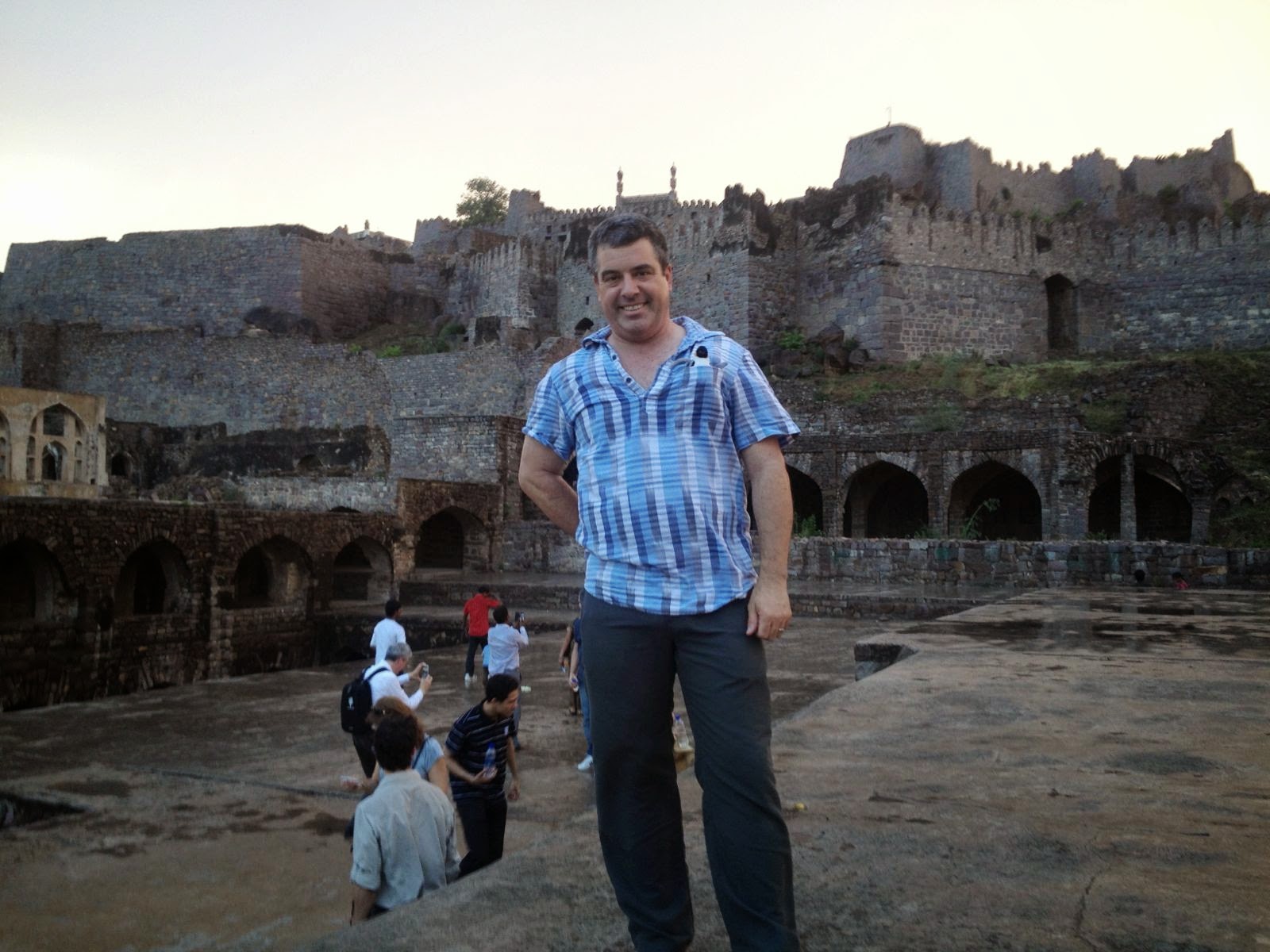 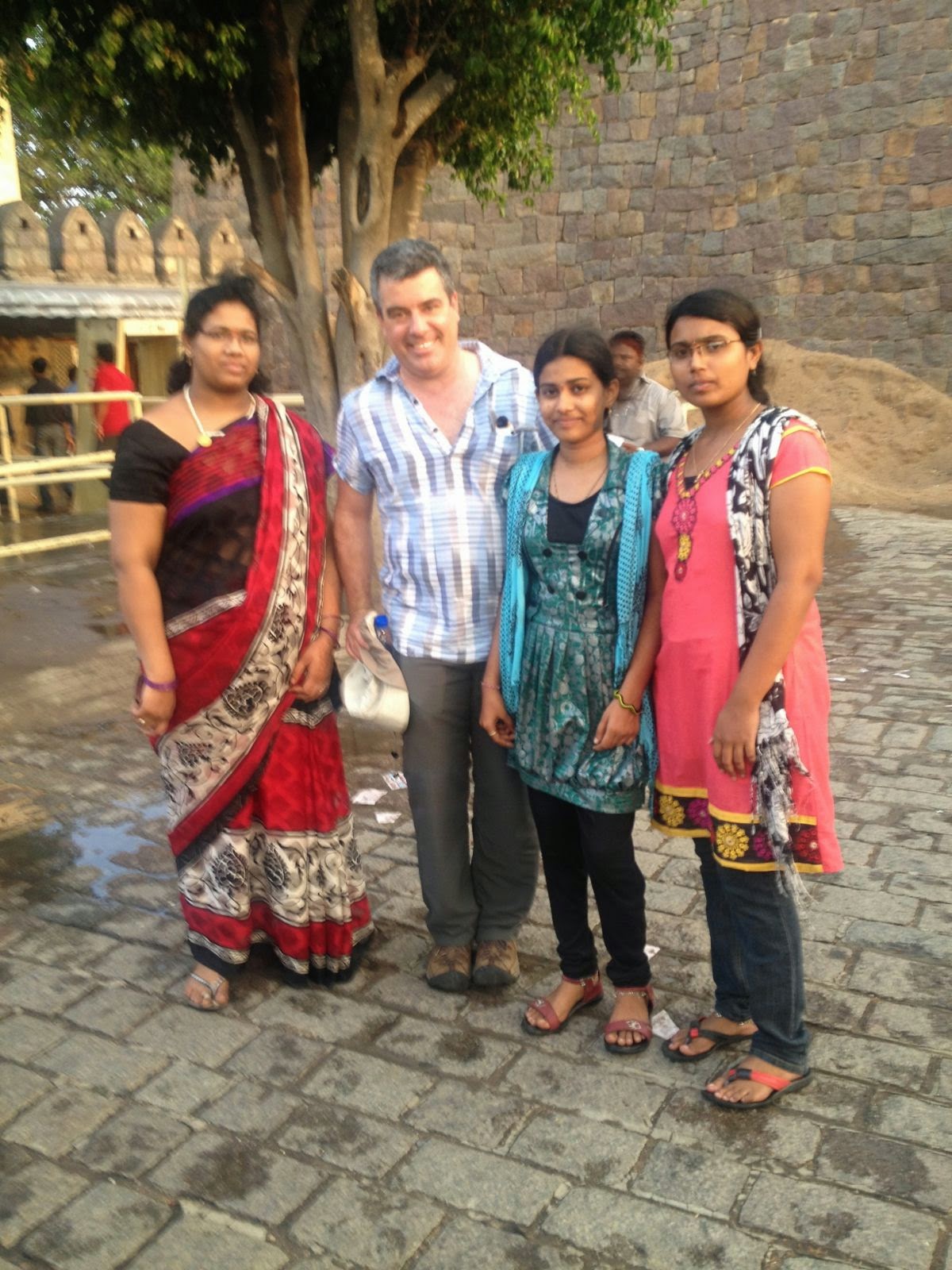 It's a bit tough to get a sense of the scale, but the tallest turrets are about 360 steps from the base where we're standing.  (We got there too late to climb to the top.)  As the sun set, we were treated to a too-long and too-boring sound and light show narrating the history of the fort; the historical parts were good, but they were interspersed with entire poems and songs in Hindi, which is like the first time you read the Lord of the Rings and you were like "I get it.  They like singing.  What happened next?" only it's in Hindi and you can't skip over it.

People in our group were wary of taking photos of the locals, who didn't look unusual except there were a lot of saris (so, like Berkeley) and more than a few burqas.  However the locals had no such wariness of asking if they could have photos taken with us, so I decided to get a copy of one such photo just for fun...

By the time the show was over it was dark, and the fort was beautifully illuminated... 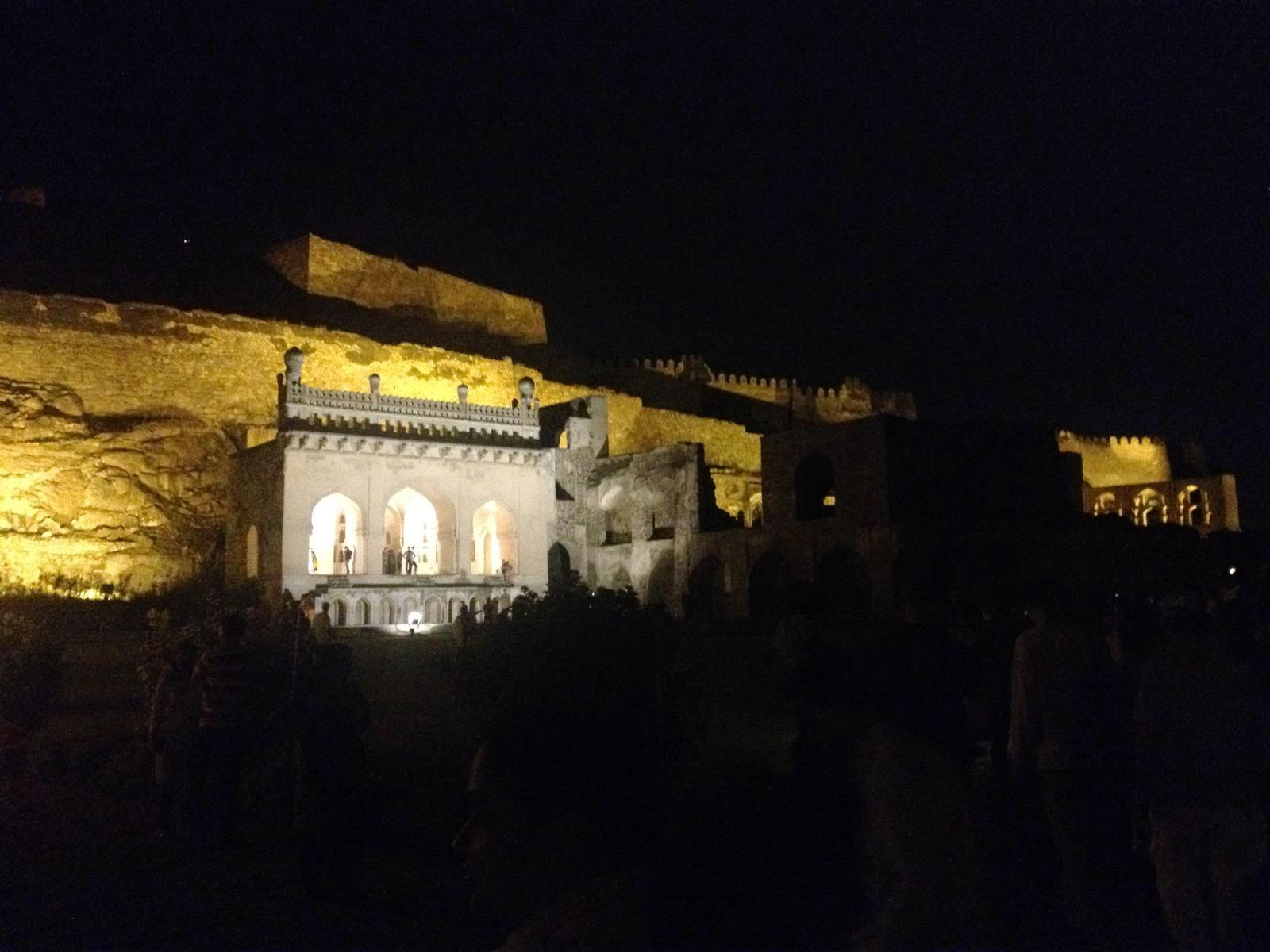 I should mention that we made the 40-minute trip there and back in a pair of microbuses that makes the school-bus-vintage vehicles used in Mexico look state-of-the-art.  Driving is a disaster here; essentially, you honk constantly and fight your way through.  Tonia and I had some experience of this in Chiang Mai; this is much worse and much louder.  Nobody on our bus could figure out the honking algorithm, but we did not go 15 seconds (literally) without honking during the entire trip.  I'm amazed there aren't more accidents (we didn't see one).  Drivers with an entire family piled onto their scooter would try to squeeze between, say, a bus and a dump truck, with the driver's facial expression suggesting that a victory in getting ahead of the bus was much more important than the safety of his children.

Later today I'll visit Char Minar, another impressive structure built by the Qutbs, and around which the old town is arranged. This will be tricky because as of today, India has decided to split the state of Andhra Pradesh (whose capital Hyderabad is) into two states, reflecting the fact that before Andhra Pradesh joined India after independence, it really was best thought of as two ethnically distinct regions.  It's hard to see how this will be beneficial (Scotland, are you listening?), but in any event, today is the official day when the split is effective, and Hyderabad will temporarily be the capital of both regions. All kinds of dignitaries, plus a boatload of people and probably demonstrators, will be downtown to observe the event.