Today Penguin and I went on a tour of a "rural" village about 90km north of Mumbai.  I use the scare quotes because the village is only about 10km outside a sizable and bustling town (really a small exurb of Mumbai) with modern buildings; apparently the urban frontier is continually encroaching on agricultural land, and this exurb was agricultural ten years ago.

Essentially, the tour consisted of visiting two or three farming families, and a bit of walking in the actual country.  As in many small European towns, farmers consume some of their own produce (rice, cucumbers, root vegetables…) and trade the rest.  These particular farm families are fairly prosperous.  I got to sit in their houses briefly, but as my TripAdvisor review notes, there wasn't really any interaction, for which I ding the tour company mightily. 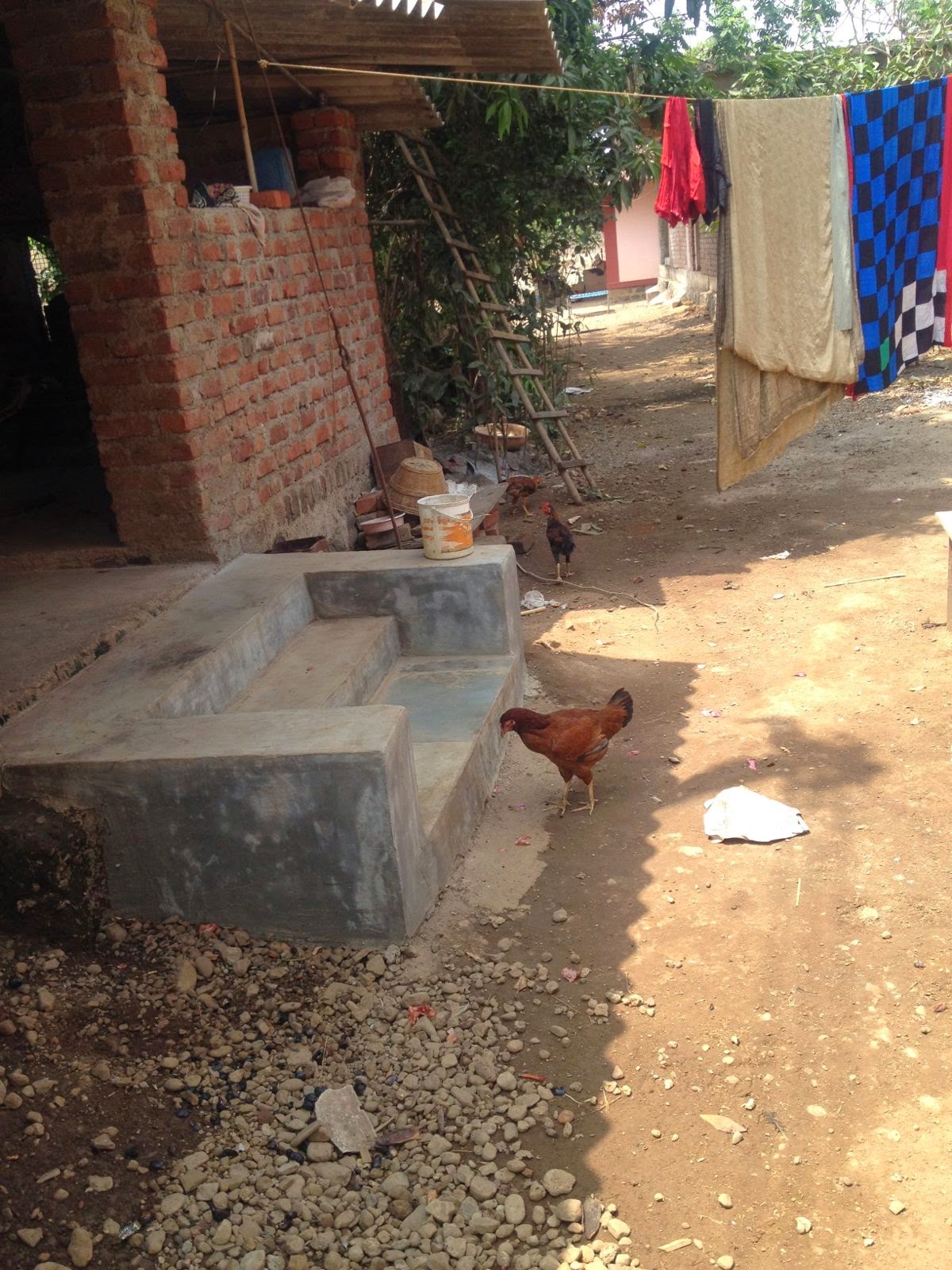 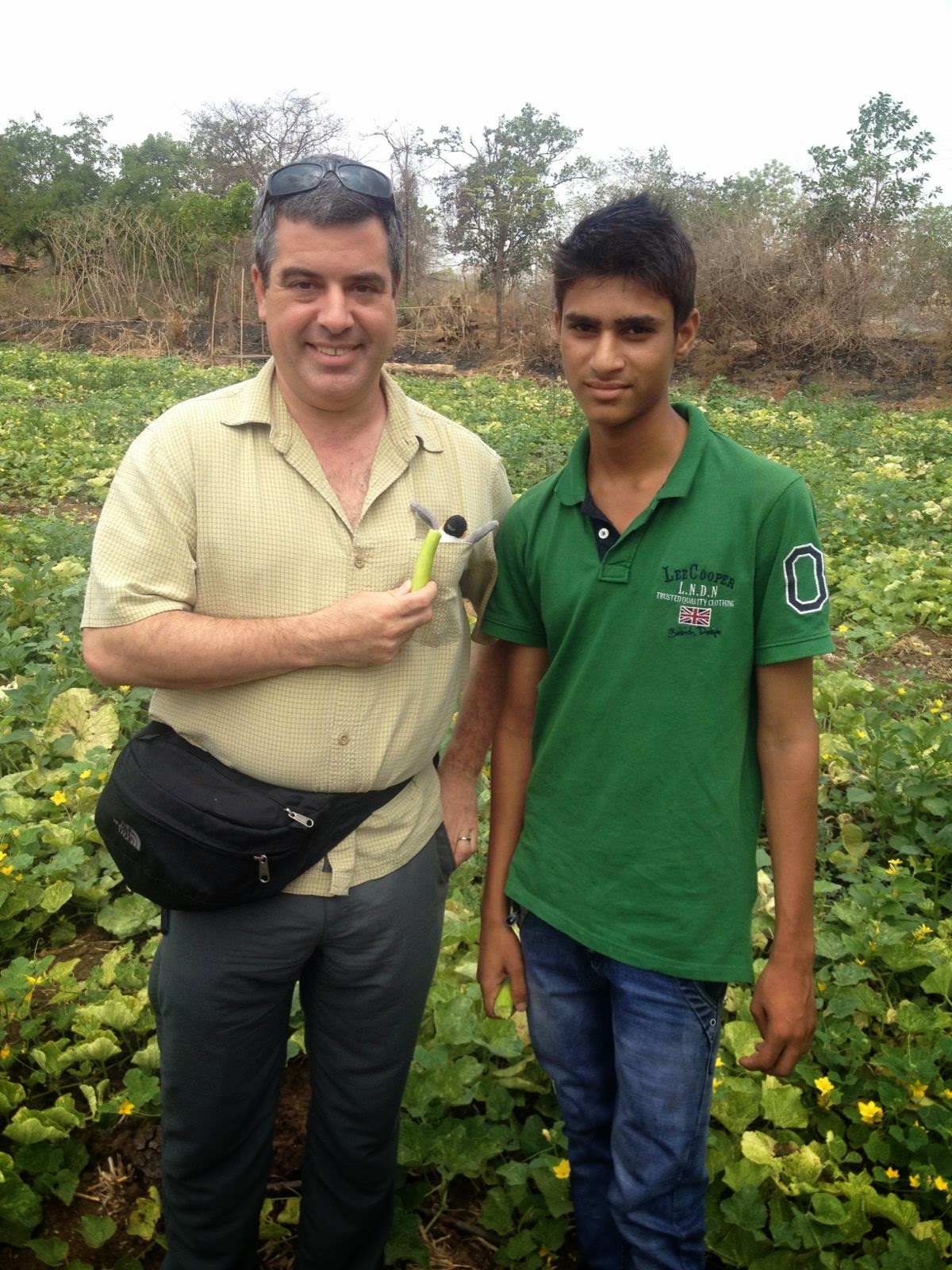 Penguin and I got to travel on one of those wooden carts pulled by bulls.  I asked why they didn't put tires on them—the wheels are wooden spoked with iron rims, as they have been since the 1800s.  The nominal answer is that these carts are used to haul wood out of the forest along trails where rubber tires would sink; but I think the real reason is that they also preserve a tradition. 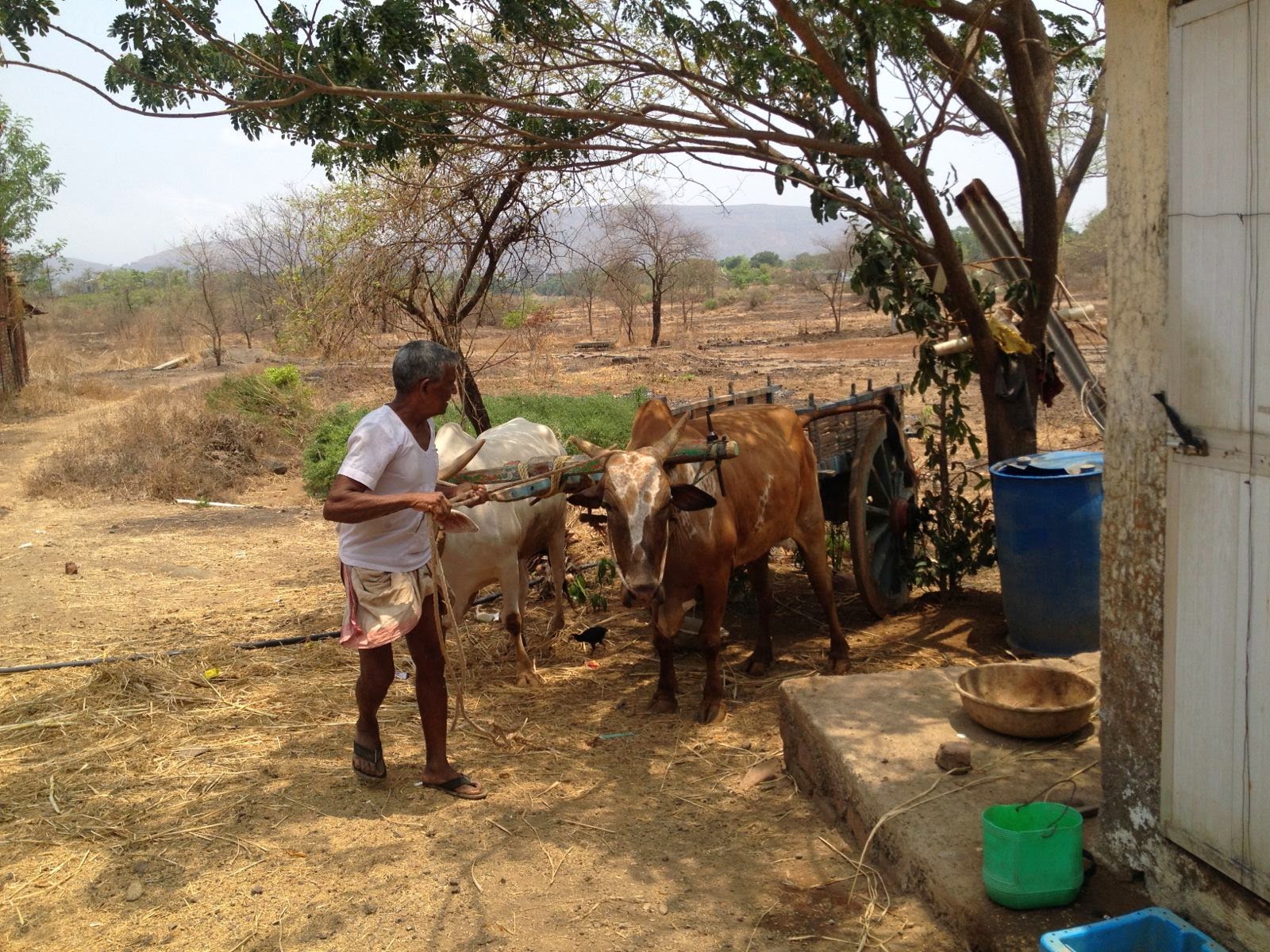 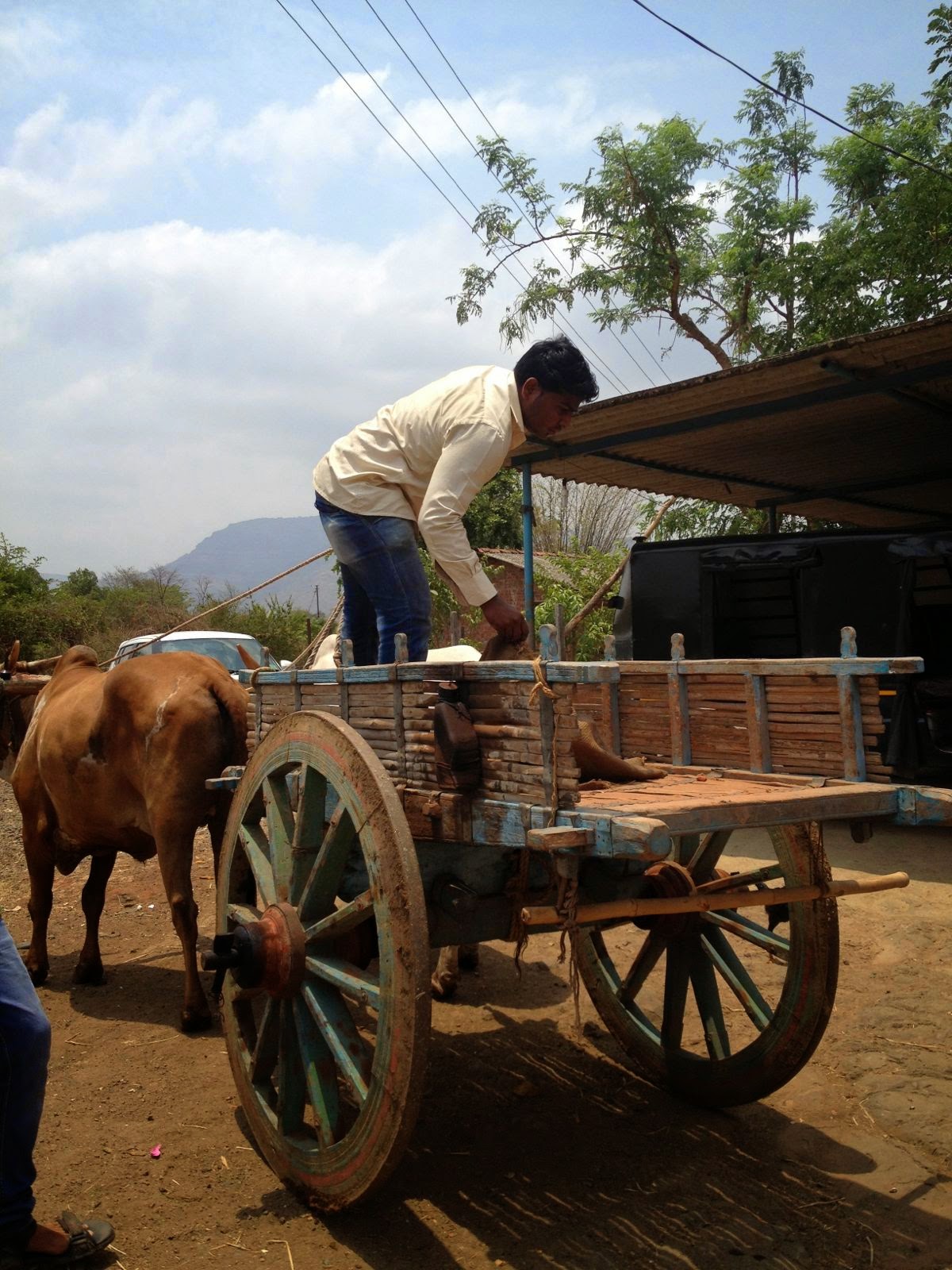 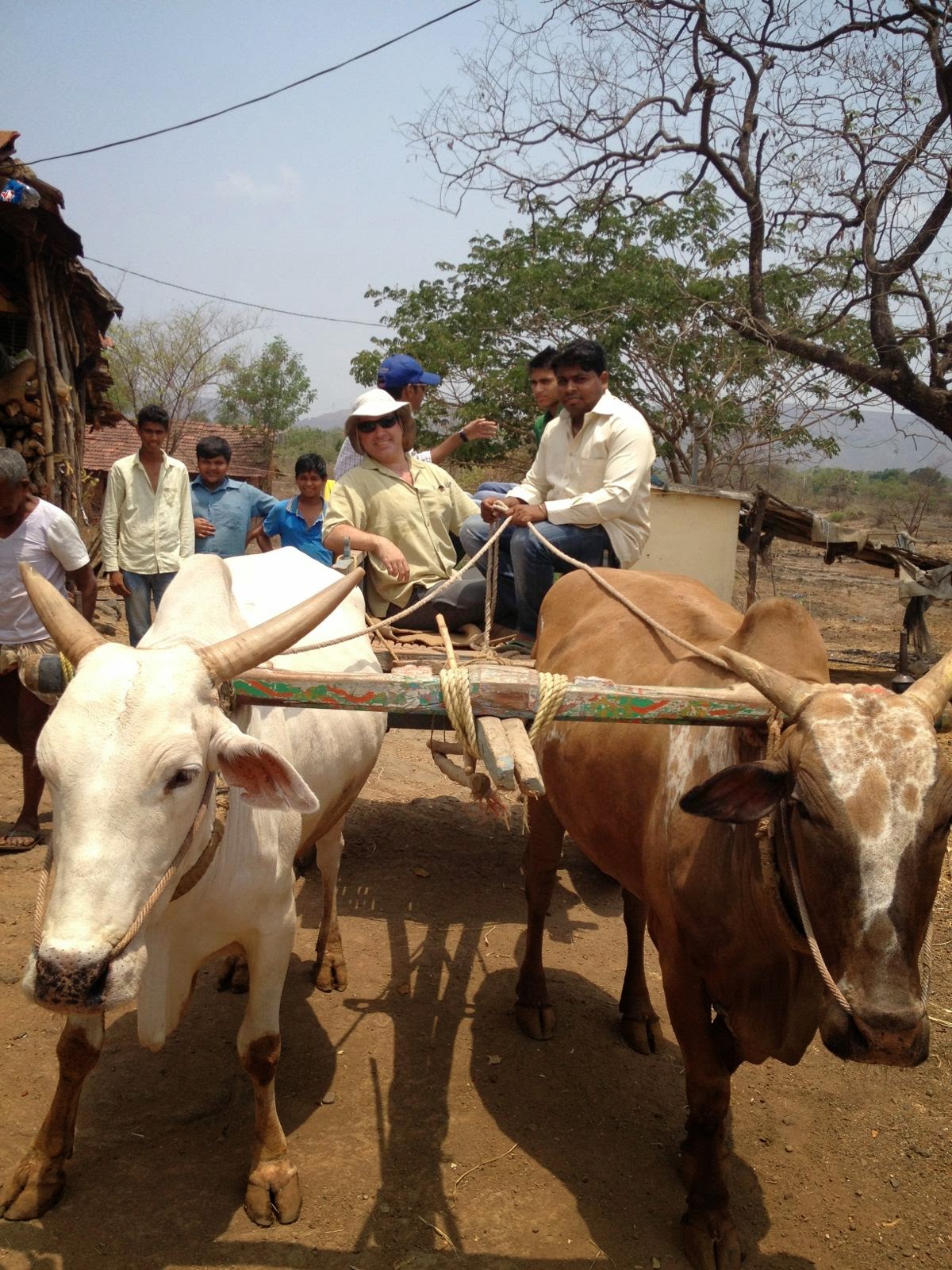 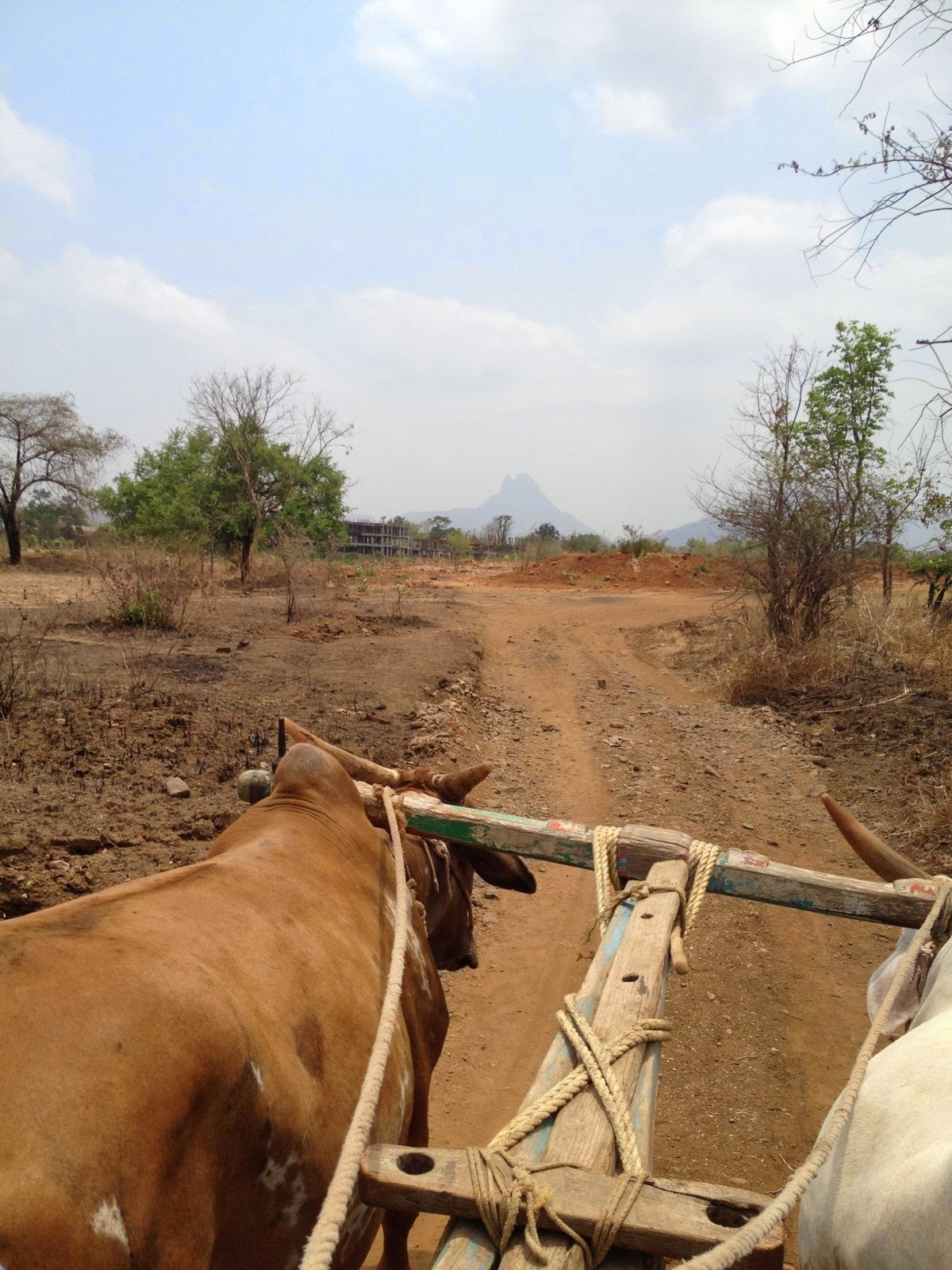 The scenery is quite pretty; there are mountains all around, some of which are still active hill stations (holiday retreats) built by the Brits, and one of which has a fort at the top that was built by Chhatrapati Shivaji.  (You did read about him in the previous post about Mumbai, right?)  People do sometimes hike up there, but the trail is supposed to be treacherous, and I can't imagine hiking in this heat.  (In the cool season it gets as cool as 77 degrees...still too hot for me.) 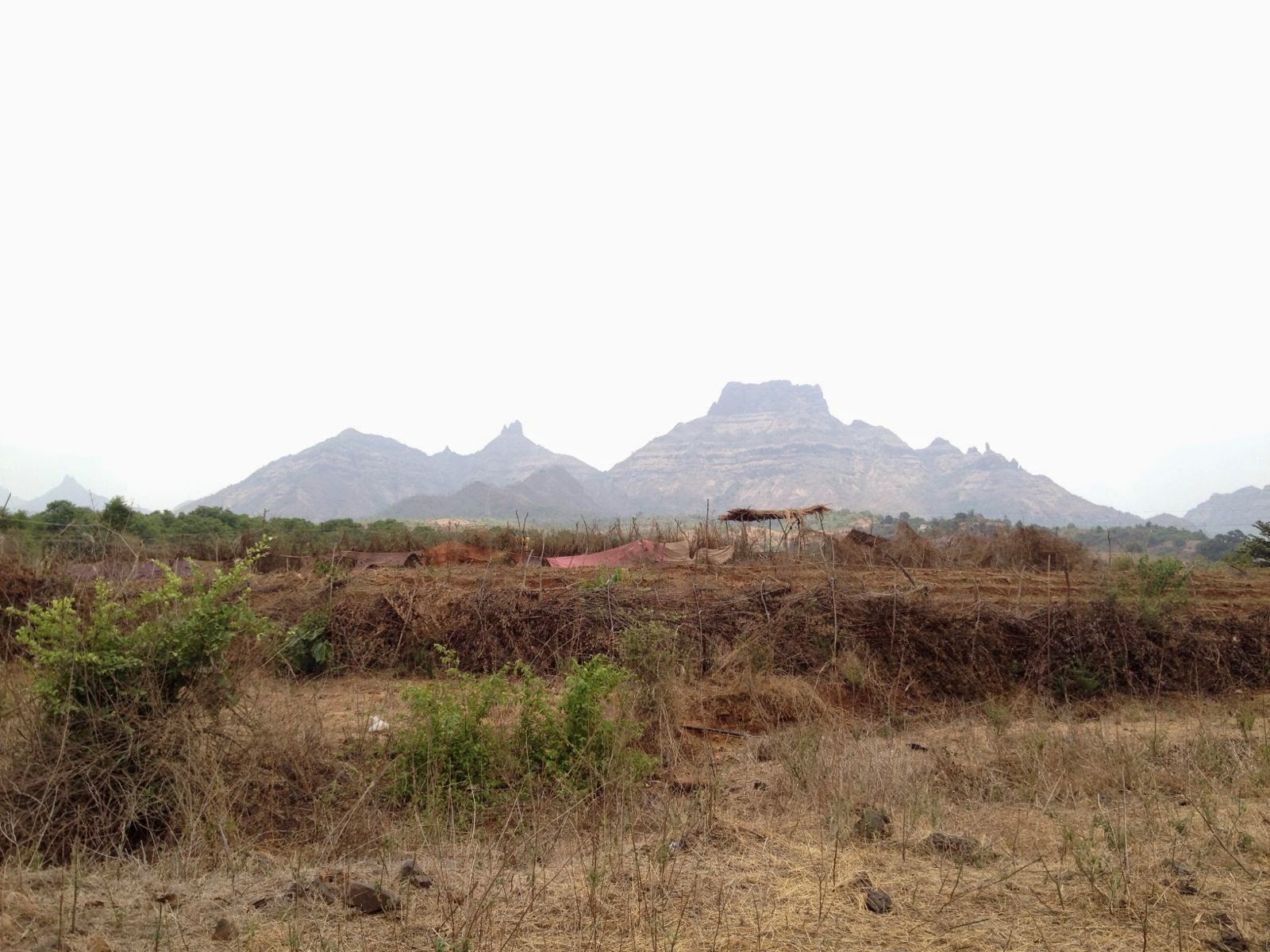 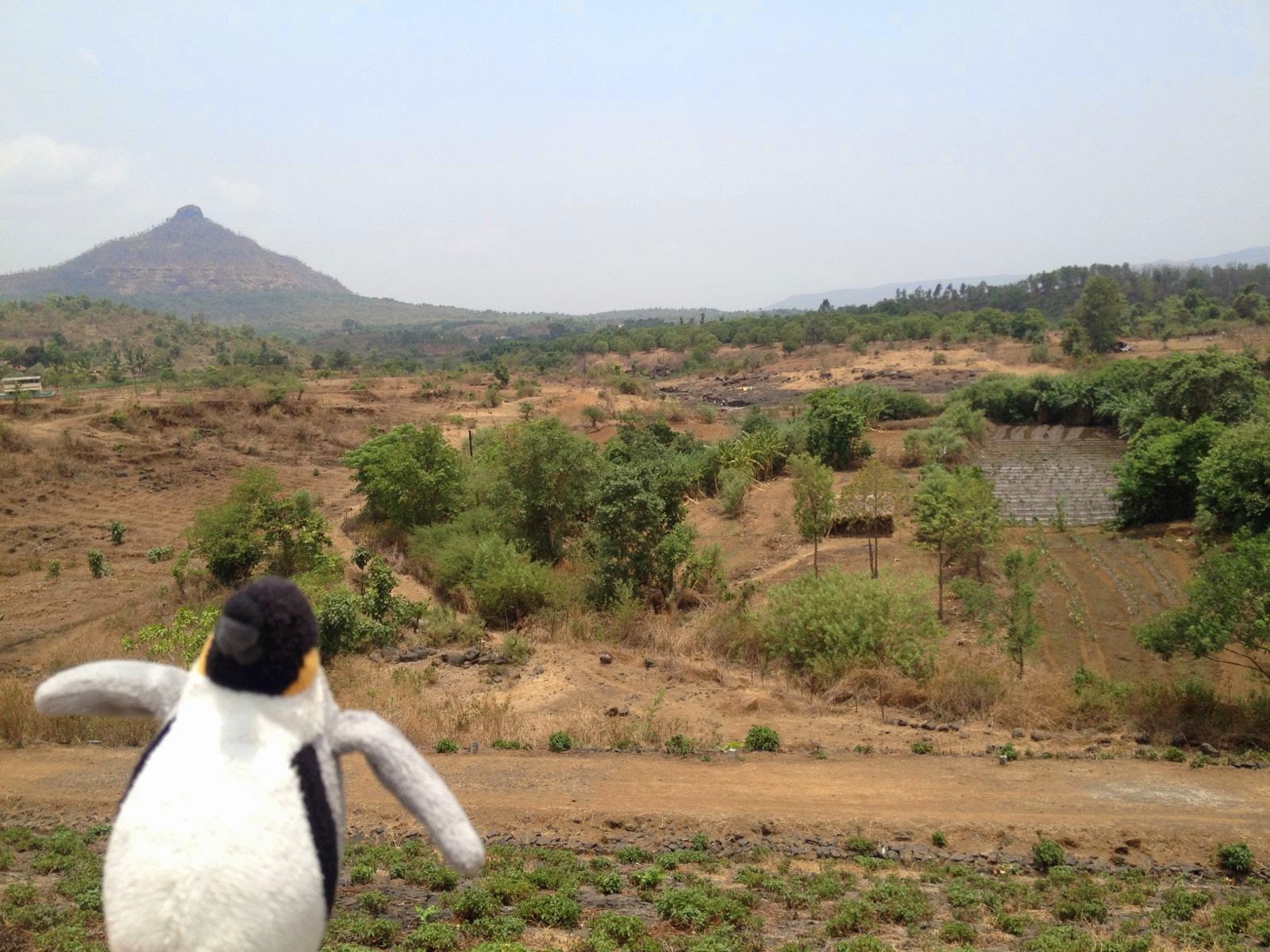 We also walked out over a dam—the lake and river are currently mostly dry, but will fill when the monsoon comes, and all the stuff around it will turn green and grow things.  It's a popular picnic spot because of the surrounding view. 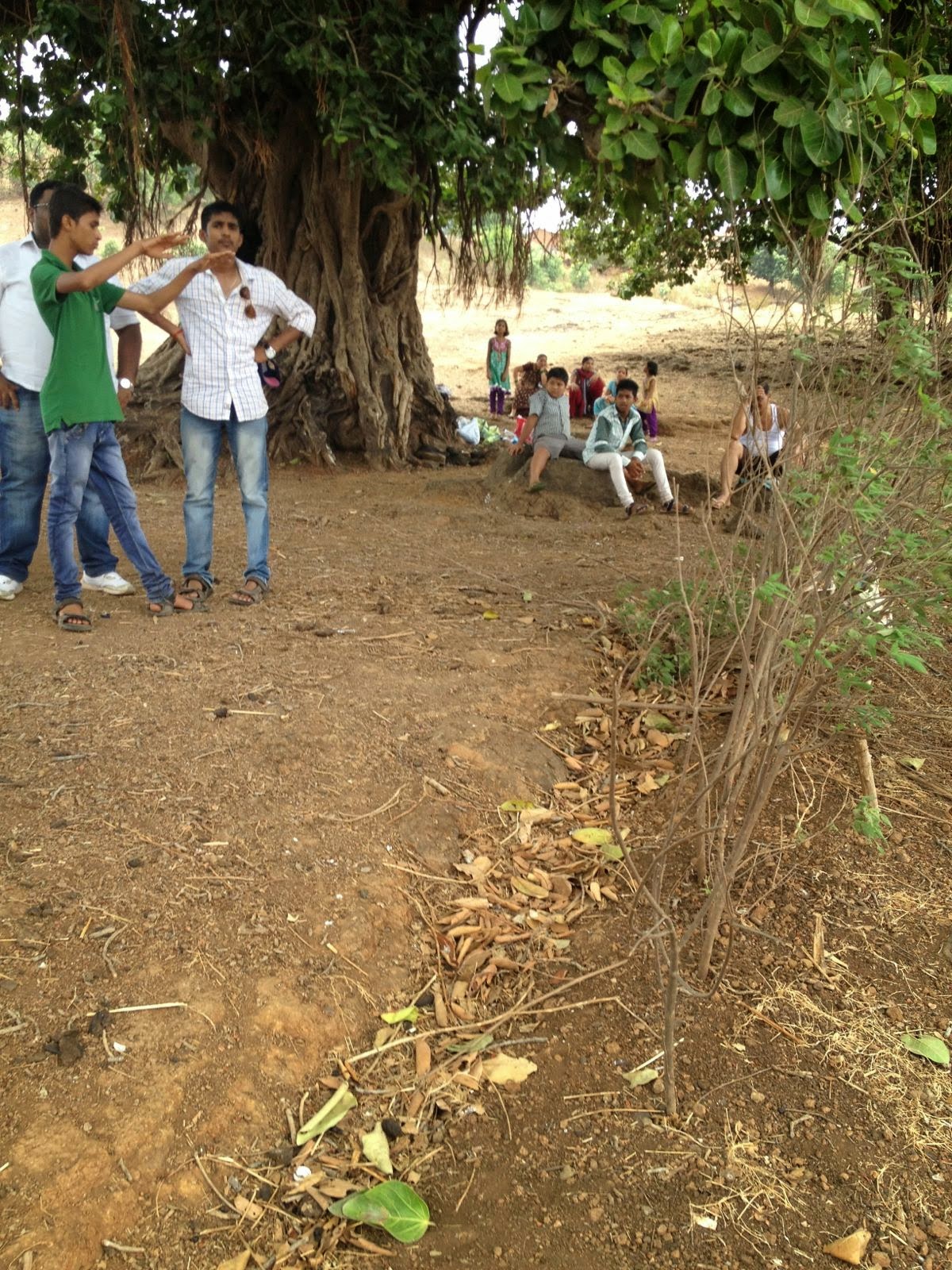 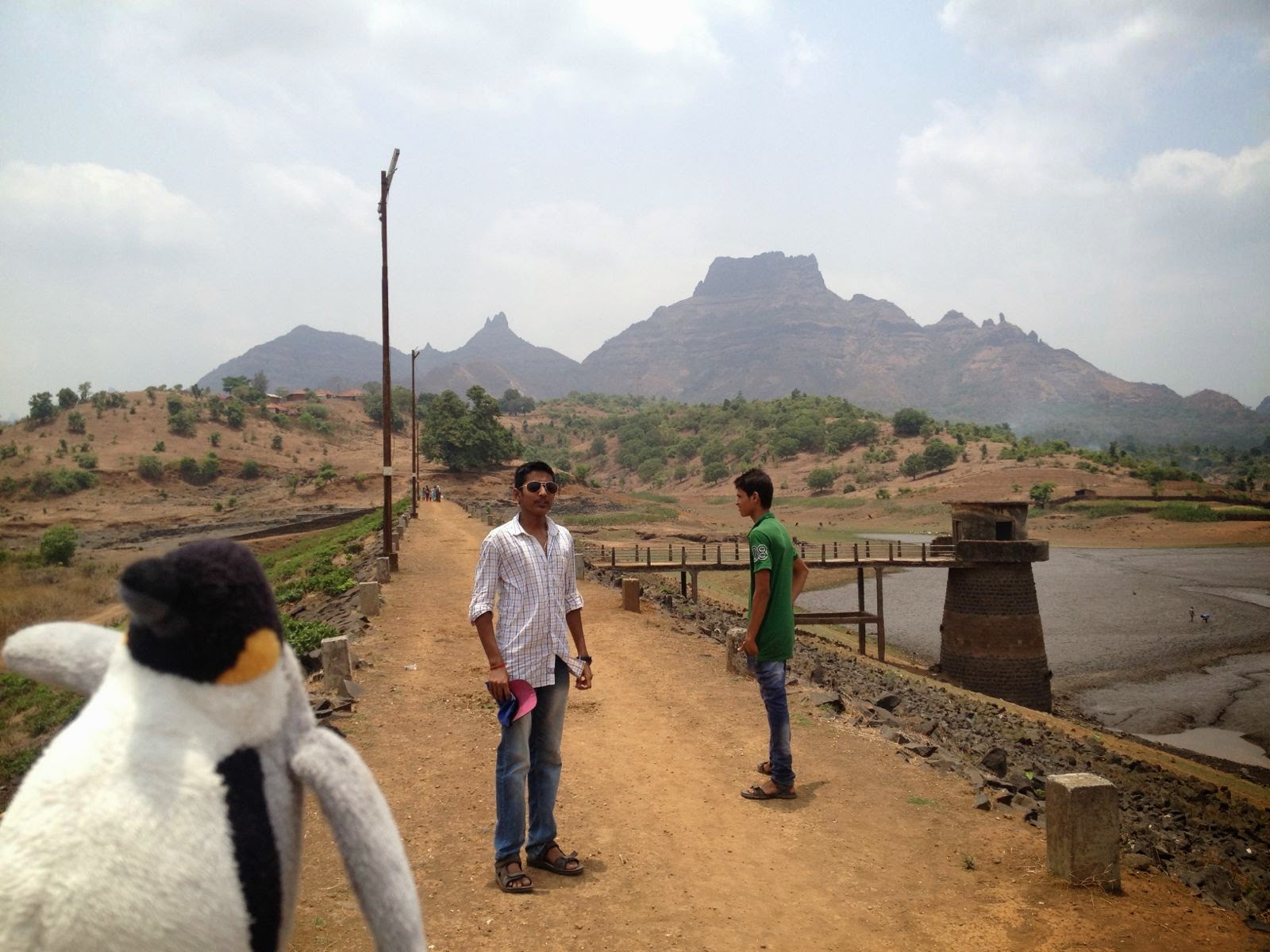 We ended the tour at a sort of outdoor informal restaurant for locals. Think "comedor" in Ecuador: one or two dishes are available, it's home cooked by whoever runs the place.  We had some chole chana (fried chickpeas with garlic and onions) and a tasty chicken curry, and of course Kingfisher beer.  This is my driver, Dupesh, who also works as a piano tuner (!) and with whom I had a great conversation on the ride up from Mumbai, one of the only auto rides I would describe as truly harrowing.  Drivers here have great operating skills and reflexes—I haven't seen one accident—but traveling on expressways here isn't for the faint of heart.  (My guide isn't in the photo, Vishal, but he wasn't very useful.  He didn't say much and it's not clear what value he added.) 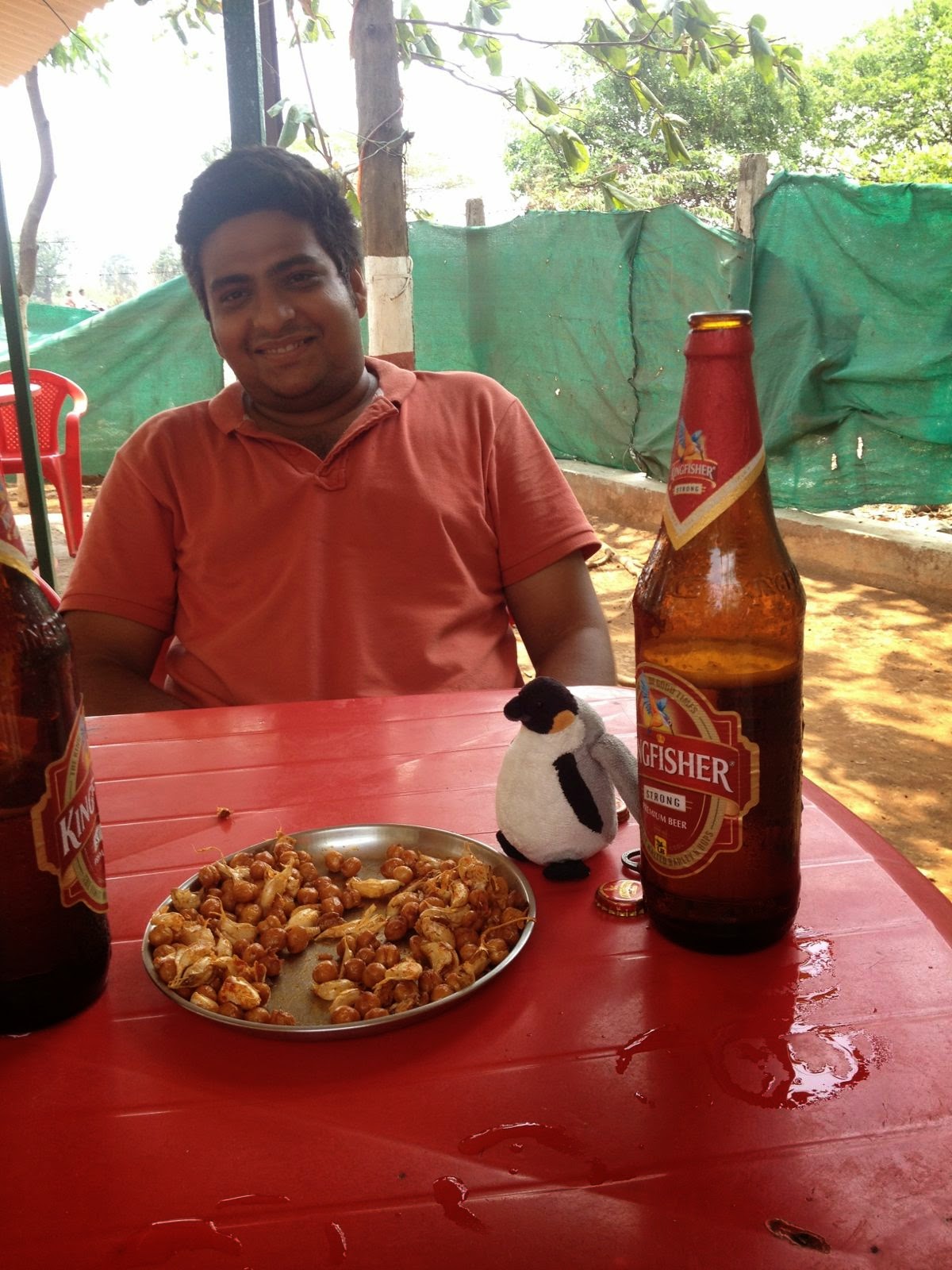 Although I could've gotten a ride back with Dupesh, I asked if they could just drop me off at a nearby train station, so I could experience the Mumbai commuter trains.  They tried to sit me in a window seat, but I spent the whole trip hanging out the open doorway like the locals (or like cable car passengers in SF). 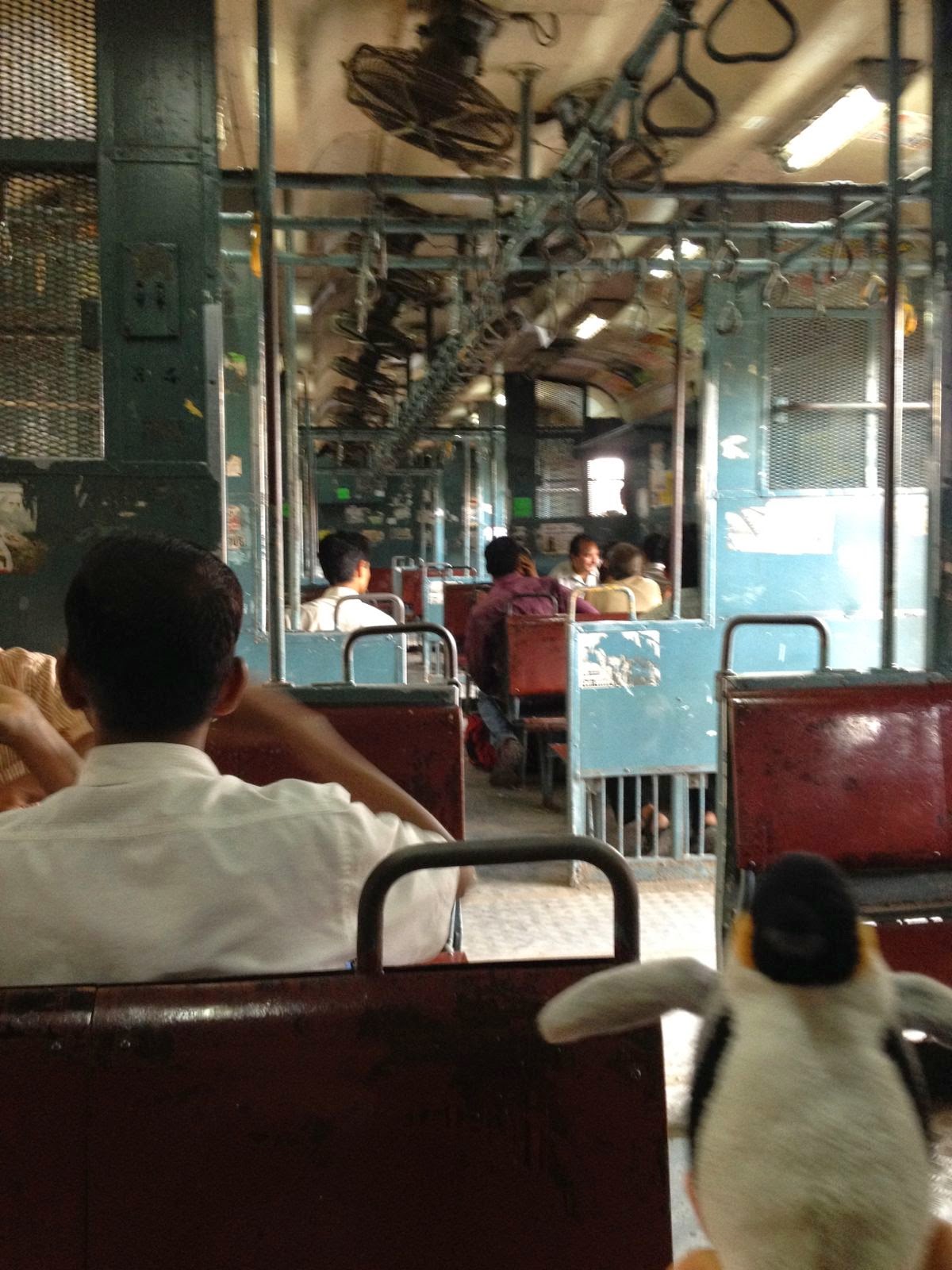 Although my official slum tour is tomorrow, we definitely passed through slums on the hour-long train ride back to CST... 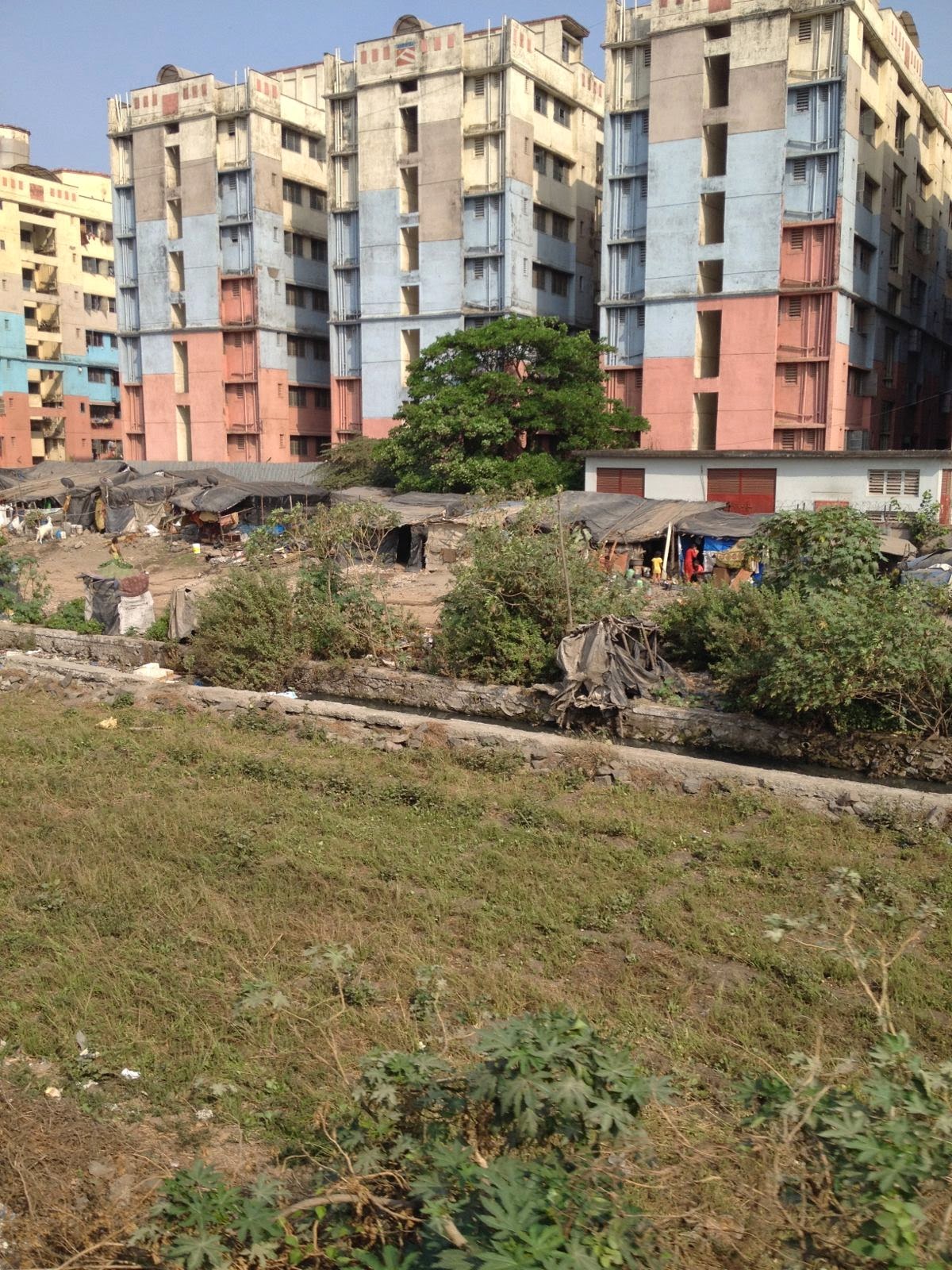 The amount of trash here beggars the imagination.  Every urban waterway is toxic and choked beyond hope. Trash mounds are the defining topographic feature along the train lines...

...  And yet I have not seen a single garbage can.  I asked one of my Mumbai guides why not, and he said the government tried to install them, but people would steal them and sell them as scrap metal.  Indeed, people have been known to steal entire bus stop shelters bolted to the ground to sell as scrap metal.  Also, there is a "just throw it on the ground" culture to disposing of trash here, so maybe people wouldn't use garbage cans even if they were provided.  The garbage and sanitation problem here is huge, and it's hard for a westerner to understand what is so hard about instituting waste collection.  Surely it would be preferable for all of this stuff to be put in a number of landfills rather than strewn everywhere, notwithstanding the "garbage pickers" who make a living by picking out recyclables and other items of marginal value, the endless numbers of corvids, and the nontrivial number of goats who pick through the mounds.

Tomorrow is the bike tour and Dharavi slum tour, and my last day in Mumbai.  It's been great visiting here, but I'm ready to be heading home by then.  Mumbai is fascinating, but it is loud, you need two showers a day to really feel clean (especially in this heat), and every place smells like something (they're not necessarily all bad smells, but with this population density and sanitation problems, there is a  lower bound on how much things smell).  My guess is visiting in cool season would be much easier on the senses!